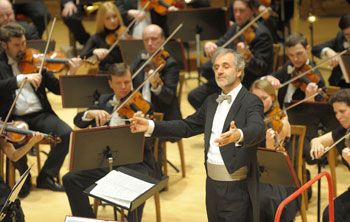 The programme includes:
Wolfgang Amadeus Mozart
Violin Concerto No 5 in A Major

From the autumn of 1770, the fifteen-year-old Mozart was the concert master at the cappella of Salzburg’s Arch Bishop, Count Hieronymus von Colloredo. A brilliant violinist, Mozart was forced to indulge the tastes of the count’s court, regularly composing serenades and divertissements in which he always found room for some virtuoso passages that the public loved.
When Mozart turned to composing violin concerti in 1775, he was already well familiar with the concerto styles of Vivaldi and Corelli and had made extensive studies of scores by Tartini, Geminiani, Locatelli and Boccherini. And, of course, in his concerti he attempted – particularly starting with the Third in G Major – to follow stricter and deeper images of the genre. Not for a second did Mozart dampen his lively and stormy temperament with the chains of the “classical” style. He combined sincerity and the truth of lyrical effusion with dazzle and wit, at the same time avoiding external effects. The Fifth Concerto is, beyond doubt, one of Mozart’s greatest achievements; in it he literally sums up all of his achievements in the genre that he had tried out himself as a composer and performer in one person. In the Allegro, the lofty lyricism is blended with gracious archness; the confessionary pages of the Adagio are filled with direct and deep emotion. In the final Rondo the refined minuet frames the suddenly explosive and stormy intermezzo “alla turca” (which is why the Concerto is sometimes known as the “Turkish Concerto”). Mozart borrowed this section from music for a ballet scene in “Envy in the Seraglio” which he had written for the early opera Lucio Silla.
The twenty-year-old Mozart – however much he might regret it! – himself said that he had “hung his violin up from a nail” and never again turned to the genre of the violin concerto. Appearing as an ensemble player when performing his quartets and trios, as a rule he preferred the viola, perhaps paying his dues to the instrument’s deep and sheen-less timbre.

In October 1783 when travelling from Salzburg to Vienna, Mozart stopped for a few days in Linz. The composer was immediately offered the opportunity to perform an “academy” (or a solo recital in today’s language). At the time, it was common practice to introduce new works to the public at every concert. In a letter to his father dated 31 October, Mozart wrote that “On Tuesday 4 November I am performing an academy at the theatre here. And as I had not brought a single symphony with me I am racking my brains composing a new one that has to be finished today.”
Mozart composed the huge – and for the times positively vast! – symphony (lasting some forty minutes) in three days. It is not so much the composer’s incomparable gift that amazes us, and neither is it the divine source of his melodic charm, rather it is the power and dramatic integrity of the idea behind the symphony. Three years after composing the Linz symphony wrote the Prague symphony, which was first performed in January 1787 in the city that gave the work its name. In the summer of 1788, once again in an incredibly short space of time, he composed his unfading triad of final symphonies (all three in two months) in E Flat Major, G Minor and C Major (Jupiter).
To a great extent following the path already trodden by Haydn and inspired by the great Bach’s polyphony, Mozart was looking beyond the horizon of the “gallant era,” foretelling Beethoven’s heroic music and Schubert’s romantic symphonism... In this sense, the Linz symphony (1783) can be ranked alongside Mozart’s final symphonic masterpieces. Alfred Einstein shrewdly remarked that “here the gallant and professional styles are blended into one – an outstanding instance in the history of music. The symphony, at one time a musical genre the purpose of which was to make opera audiences fall silent before the beginning of an act or to open and close a concert, was now at the very heart of the concert evening.”

In the art of Johann Strauss (Son), the Viennese waltz and other types of “decorative” theatre music – polkas, quadrilles and gallopades – attained an extremely high level of poeticisation. Taking the baton from his father Johann Strauss I and the founding father of the genre Joseph Lanner, Johann Strauss (Son) took the Viennese waltz from ballrooms to the philharmonic stage. Strauss the composer and conductor also received enthusiastic responses from his contemporaries – Liszt, Berlioz, Wagner and Brahms – as well as those who continued the traditions he founded, among them Mahler, Richard Strauss and Ravel... Johann Strauss won particular fame in Russia with his regular annual concerts at the railway station in Pavlovsk near St Petersburg, where he performed his own music alongside works by Glinka, Tchaikovsky and other Russian composers. Josef Strauss, who composed over three hundred popular dance pieces, also visited Russia on two occasions and performed with his brother’s orchestra.
Iosif Raiskin