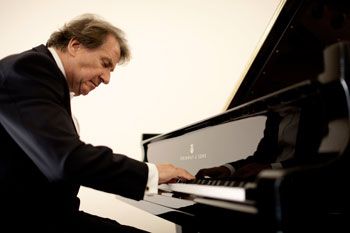 The First Piano Concerto (1854–1859) emerged from sketches for a sonata for two pianos when Brahms understood that the work was not at all chamber-like in terms of its scale. The composer restored a heroic image to the soloist, whom Romantics had so often presented as a martyr. No self-will and no rubato: the first piano solos are accompanied by measured accents of the trumpets and kettle drums. These subside only when the soloist begins a new theme – in the character of a triumphant hymn.
The composer himself said of the second section that it was a portrait of Clara Schumann, while the first theme in the manuscript is marked with the words “Blessed is he that cometh in the name of the Lord.” The theme of the finale is in the Hungarian manner. A similar theme was to come in the finale of the Double Concerto, secondary themes in the Fourth Symphony and in the finale of the Second Piano Concerto – the composer of the Hungarian Dances was true to his passions.
The form of the finale is stern and commensurate. As a concert pianist, Brahms gave the soloist only brief cadenzas. Unfortunately, the first audience in Leipzig did not see any virtuoso skill in Brahms’ original technique. The premiere was a fiasco and ruined the young composer’s relationship with his publishers Breitkopf und Härtel. On the other hand, Brahms quickly found himself another publisher – Friedrich Simrock, and the rest is history...

Brahms’ Fourth Symphony (1884–1885) was the first symphony ever to open with a “fragmented” theme comprising separate motifs. It subsequently formed the basis for the song O Tod, wie bitter bist du. The trumpets give out signals as if a reminder of the Day of Judgement, while the wind instruments playing on the octave refer to fleeting episodes from Mozart in which “the vision is funereal, a sudden gloom...”
In the captivating second movement, Brahms appears in the guise of the heir to another Viennese composer – Schubert. The scherzo is wonderfully irrepressible in its mirth, and Brahms even introduces the piccolo flute in his orchestra – for the first and only time.
The finale, with its remark of energico   passionate – going against tradition – was composed in the form of variations. Eight measured chords of the theme alternate with each other inescapably, like the advance of Fate. For the first time in this symphony the trombones emerge, giving the music a funereal character. Examples for Brahms came from the idols of his youth – Beethoven (in particular his Thirty-Two Variations) and Bach: the solo flute at the core of the movement could have been written entirely by Bach.
Anna Bulycheva