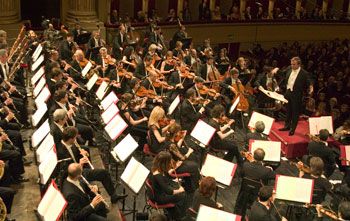 The tour by the Orchestra Filarmonica della Scala
has been made possible thanks to the support of:

2012 marks the thirtieth anniversary since the foundation of the Filarmonica della Scala.

It was established by Claudio Abbado and the musicians of the Teatro alla Scala in 1982 with the objective of enriching La Scala’s glorious opera traditions with a repertoire of symphony music. the following year, the Filarmonica formed a separate Association. Carlo Maria Giulini conducted the orchestra in more than ninety concerts and took it on its first international tours. Riccardo Muti then became Principal Conductor from 1987 to 2005. Under his management, the orchestra grew exponentially in artistic terms, establishing it as a regular visitor to some of the world’s most prestigious concert halls.

In the past decade, the orchestra of La Scala has performed on tour on more occasions than any other Italian orchestra, introducing audiences throughout the world to the Italian performing traditions. The orchestra actively promotes classical music among young people and organises rehearsals for school children before it opens each new season. The initiative Sound, Music! is specially designed to appeal to primary school children. The musicians also have a longstanding association with Milan’s leading research institutions and voluntary bodies, organising open rehearsals and special charity concerts for their benefit. They regularly participate in the MiTo Festival in concerts which have introduced symphony music to an extremely wide audience.

The Filarmonica della Scala has recorded numerous discs for Sony, Decca and EMI. The orchestra is not subsidised by public funds and its main institutional partner is the bank UniCredit.