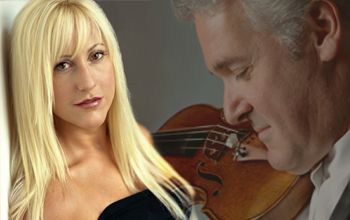 The programme includes:
Johannes Brahms
Violin and Cello Concerto in A Minor, Op. 102

When analysed coolly, Brahms’ Third Symphony (1883) would appear to comprise familiar elements from works already written. These, however, engender a great many new and pliant themes. In the first movement, as always with Brahms, there are no less than five themes, although the rules dictate that there should be only two. The very first theme, which is performed by the wind section and immediately taken up by the trombone and the double basses, moves at its own pace – three times slower than the other instruments. It appears to be somehow eternal and immutable, some kind of fundamental element of the musical material. The theme returns with Wagnerian triumph in the coda of the finale.
The second movement reminds us of the scherzos from the preceding symphonies. Opening the finale with a single-voiced theme was something that had already been done in the Second Symphony. But such a slow movement as the third – sincere, intimate and, at the same time, courageous – had never been seen anywhere before the Third.

Brahms’ Double Concerto (1887) was written for the violinist Joseph Joachim and the cellist Robert Hausmann. Looking at the sheet music, it is hard to avoid the thought that both the violin and cello solo parts are two hands for the piano – the manner of execution is so similar. Arguably, the Hungarian theme in the finale is a reminder that Joachim was born in Hungary.
In the second movement the violin and the cello perform a songful theme together, albeit with minor discrepancies as each of the soloists produces his or her own expressive details. The music of the entire concerto is filled with beautiful melodies. As with Bach, each of the voices picks up the melody – there are more than the ear can catch listening to it just once, and so this music could be listened to endlessly. The rhythm is just as complex and a large portion of it seems to slip away frequently (unfortunately, performing tradition over time has polarised this, a practice gradually being abandoned today).
No fewer than three themes of the first movement are “constructed” from intonations of the main theme. In the finale of the concerto they return once more. The interdependence of all themes is a sign of the composition’s perfection. In 1860 Brahms and Joachim wrote a manifesto against programme music. This was the only time that the composer appeared in print with a declaration in written words. Later he would subject only his music to public judgement, and his final orchestral work – the Double Concerto – is the best argument possible in favour of pure music.
Anna Bulycheva