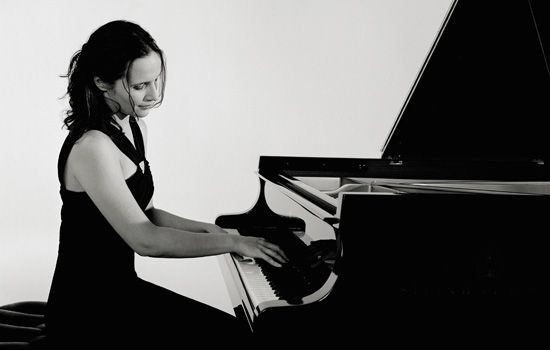 The programme includes:
Wolfgang Amadeus Mozart
Sonata No 8 in A Minor

Franz Liszt
Sonata in B Minor

Mozart’s Sonata in A Minor was written in a tonality which is extremely rare for the composer and which Haydn completely avoided, considering it the tonality of death.
The sonata was composed in the summer of 1778 in Paris, and in 1782 it was published there as “Op. 4, No 3”. Mozart’s journey to France proved to be a tragic one. On 3 July the composer’s mother died in his arms. To crown it all he experienced a series of professional failures. His hopes of finding permanent work in a Catholic country (for the Catholic Mozart this was important) were in vain. The French commissioned him to write music and they performed it, but they did not pay for these commissions. Moreover, Mozart was not enamoured with French music. Unsurprisingly, the Sonata in A Minor was one of the works he wrote in Paris.
The first movement, Allegro maestoso, is in a style of high pathos, which is underlined by the use of polyphony as it develops. The rondo finale is instilled with confusion. But in the second movement, Andante cantabile, Mozart turns to the music of a composer whom he had loved from his childhood and quotes a theme from Johann Schobert’s Sonata Op. 17, No 1 а. Schobert had died in 1767, but Mozart remembered him even in 1778 in Paris and made his pupils study his sonatas.

When Alban Berg’s piano sonatas were written in 1907 and 1908, the composer had already written myriad amateur works and sketches. Having started and then abandoned five piano sonatas unfinished, he finally succeeded in completing one of them and accorded it the honour of being listed as his first opus. From this time on, Arnold Schoenberg’s pupil began to think of himself as an established composer.
Starting his catalogue of opuses with a piano sonata was a very laudable step. Johannes Brahms had done the same thing much earlier, as had Sergei Prokofiev in 1909.
Berg’s one-section sonata Op. 1 is a work by a young man, very musical in his nature but as yet having no specific points of reference. The structure, the themes, the rhythm, the tempo and the tonality are all blurred, undefined and heading nowhere in particular. Working on the sonata, Berg was not yet aware that he would brilliantly embody the ideas of Schoenberg, his teacher (free atonality, dodecaphony, serial technique), that his style would be that of expressionism and the theme of both of his then still to be written operas would be the dissociation of personality. He was at the time experiencing vague and beautiful dreams. On the final page of this short work, where the composer left the remark “very softly,” the musical language suddenly becomes clear and it transpires that there actually is tonality in this work – B Minor.

Although Liszt’s Sonata in B Minor is dedicated to Robert Schumann, its closest musical “relative” would be Wagner’s musical dramas and Liszt’s own symphonic poems. Hearing the sonata for the first time, Wagner was ecstatic, and there was indeed much to rejoice at. Piano works on such a scale had not been written since Beethoven’s time. Moreover, Liszt’s grandiose sonata is in one section; without interruption it lasts over half an hour and the piano sounds at times like the orchestra and at times like the organ.
Liszt did not give the sonata a programme title, but there is no doubt that it does not belong to the world of “pure music.” The uninterrupted development of the three themes that are subjected to various metamorphoses, even transforming into the reverse of what they began as, bears witness to the facts that there is a “plot” and that there are “characters” in the sonata. Most of all, Liszt was interested in two great subjects – The Divine Comedy and Faust, which formed the basis of two of his symphonies. Regarding the two sonatas, the second bears the title Fragment after Dante. Liszt completed this Sonata in B Minor in February 1853, but the public at large heard it only in 1857 when it was performed by Hans von Bülow. In the 19th century this work was rarely performed and only came to be appreciated in the 20th century.

Today, Béla Bartók’s Romanian Folk Dances are best known in arrangements for violin or for orchestra, whereas Bartók, a brilliant concert pianist, had composed them for the piano. 1915 was to be the composer’s “Romanian” year because of the abundance of works based on recordings of Romanian melodies he wrote during a lengthy fieldtrip in 1913. Bartók became interested in folklore soon after his twentieth birthday, recognising that his music was lacking in originality while his “national” style was merely an imitation of Liszt’s Hungarian Rhapsodies. Thus began his travels with his phonogram.
He recorded Romanian music starting in 1908, collecting a total of three thousand, four hundred and four melodies. The composer considered these as a rule to be less spoiled by popular and commercial town music than Hungarian melodies. He was interested in the most ancient peasant dances and songs, preserved in their original form.
Many performers underline the natural power and the rhythmic energy in the  Romanian Folk Dances, while the composer himself performed them (or at least part of them, including the oriental third and fourth pieces) in a delicate and refined manner.
Anna Bulycheva