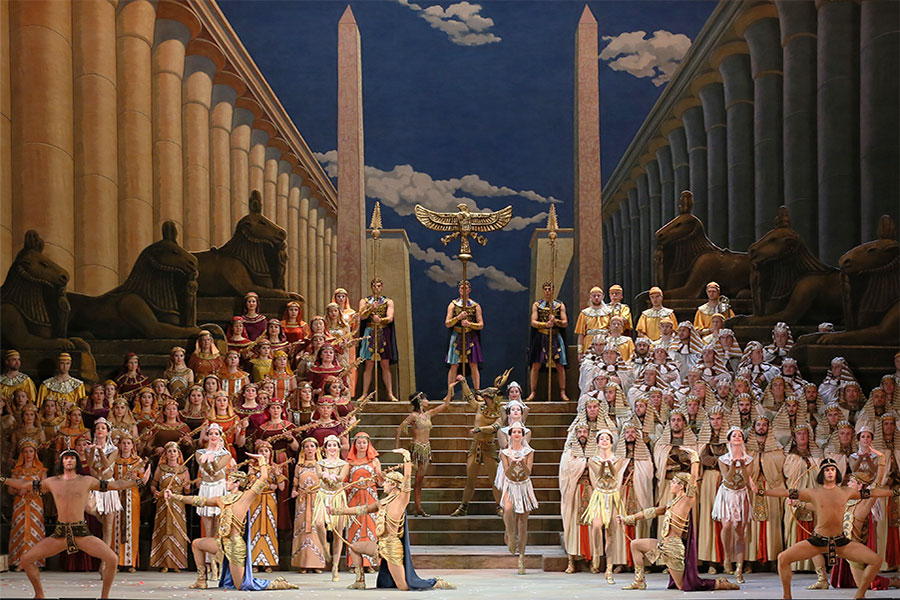 Act I
Scene 1. At the Pharaoh’s palace at Memphis news arrives of an impending invasion by the Ethiopians. The High Priest Ramfis prays to Isis, the protectress of Egypt, to reveal the name of a military commander who can win the battle. Radames, head of the palace guard, dreams of being chosen by Isis and that if he heads the army he will be victorious and as a reward demand the freedom of his beloved – Aida, one of the Pharaoh’s slaves.
Amneris, the Pharaoh’s daughter, is secretly in love with Radames. Seeing the young man looking deeply troubled, Amneris begins to guess at his love for the slave girl. Aida’s confusion serves to increase her suspicions.

Scene 2. A hall in the Pharaoh’s palace. A messenger arrives with troubling news: the Ethiopians, headed by Amonasro their King, have entered Egypt. The will of the gods is revealed to the Pharaoh: the Egyptian forces will be led by Radames. He receives a blessing for victory.

Scene 3. Aida is in despair. Her soul is consumed by a torturous battle between her love for Radames and fear of her father, King Amonasro.

Scene 4. A temple in Memphis. A grand ceremony for Radames’ dedication is underway. The High Priest Ramfis presents him with a sacred sword and asks the gods to grant the Egyptian army victory.

Act II
Scene 5. Amneris’ chambers. She awaits the return of Radames who has been victorious over the Ethiopians. Whatever the cost, Amneris wants to know the truth about Aida’s feelings. She tells the slave girl that Radames has been killed. Aida is unable to hide her grief. He is, however, alive, and Aida loves him – now Amneris knows it and demands that the slave girl renounce her love.

Scene 6. On a square in Thebes everything is ready to greet the victors. Captive Ethiopians, among them Amonasro, are paraded before the Pharaoh. His daughter rushes to him, but he warns her not to reveal his name and title. To remove all suspicion he claims he is a military commander and says the King of Ethiopia has died in battle.
As a reward for gaining victory, Radames asks the captives be granted their freedom. On the advice of the High Priest, the Pharaoh keeps Aida and her father as hostages but grants the others their liberty, and Radames will be given his daughter’s hand in marriage as a reward.

Act III
Scene 7. On the banks of the Nile in the Temple of Isis, Amneris is preparing for her marriage to Radames. Here Aida is also waiting for her beloved to bid him farewell forever. Amonasro appears. Discovering his daughter’s love for Radames, he demands that Aida discover which way Radames will take his warriors against the Ethiopians. He reminds Aida that she is a royal princess and not a humble slave girl. Stricken by mental agony, Aida agrees to carry out her father’s demands.
Radames arrives. Aida suggests fleeing together with her beloved to Ethiopia – only there can they be happy. Aida attempts to discover the route the army will take. Amonasro listens to Aida and Radames’ conversation. He is triumphant: now victory is assured. Radames understands that he has committed treachery and surrenders to the priests. Aida and Amonasro hide.

Act IV
Scene 8. In an underground court Radames’ fate is to be decided. Amneris begs her beloved to repent and promises him freedom, riches, the throne – everything if only he will forget Aida. But Radames is unbending. For love he has sacrificed his honour and betrayed his own land and he is ready to be punished for it.
The High Priest Ramfis pronounces the sentence – for his treachery Radames will be entombed alive. In despair, Amneris curses the priests’ inhumanity.

Scene 9. Aida has stolen into the vault beneath the temple in order to share her beloved’s fate. The priests can be heard singing inside the temple. In deep sorrow, Amneris bends down over the stone concealing the entrance to the underground vault, begging the gods for spiritual peace.

Verdi was commissioned to write the opera Aida by Isma'il Pasha, Khedive of Egypt. It had been planned for it to inaugurate the Cairo opera house, and the opening of the opera house in turn heralded the conclusion of construction of the Suez Canal. In its concept, this new trade route from the Arabian Sea to the Mediterranean was to usher in a new age of prosperity for Egypt, while the first Egyptian national opera, composed by a great Italian, was to make the country part of European culture. Verdi did not succeed in completing his opus for the opening – Aida's premiere took place one year later, and the opera was successfully performed at the Cairo theatre until its collapse. Ever since the premiere, it has never left the world's great stages.

Against a backdrop of the glorious conquests of an ancient empire, there unfolds the story of the love between the Egyptian military leader Radamès and Aida, the daughter of the King of Ethiopia, which is at war with Egypt; she has been brought to the Egyptian Court as a slave. This love proves stronger than the promise of glory and power, stronger than loyalty to one's homeland and, in a certain sense, stronger even than death. What is unusual for one of Verdi's operas is that implacable Fate, in the spirit of the ancient world leading the characters to their deaths, is ultimately neither gloomy nor tragic. Death in love and in the name of love appears as some kind of happy oblivion following all of life's storms.

In European culture, Egypt (indeed, the Orient as a whole) was associated with luxury, and the way in which Aida is constructed favours to such luxury. Alexei Stepanyuk's production makes use of rich and varied Egyptian clothing and splendid and majestic sets that frame the choral scenes of celebrations and divine worship. There are also palm trees, ancient stones, a golden calf and a boundless blue sky – everything is depicted in tremendous detail and with great historical accuracy, almost as if actually taking into account the tastes of Verdi himself or Professor Preobrazhensky. It introduces the audience of today to the great tradition of grand opera, all but out of fashion with contemporary directors. Denis Velikzhanin