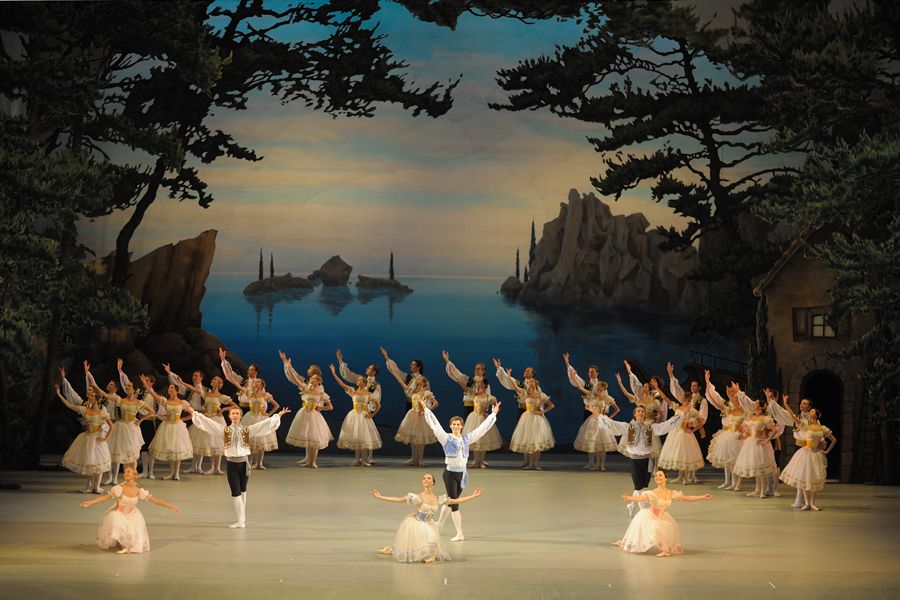 Act I
The young Sicilian sailor Matteo is preparing for his marriage to the beautiful village girl Giannina.
One day he catches the enchanting naiad Ondine in his net, and she confesses her love for him.
Matteo is astounded by Ondine´s beauty, but he tries to resist his emotions. Bewitched, he returns home to his mother and Giannina.
Ondine, invisible to humans, follows him. She provokes discord and anxiety, even appearing to him in his dreams.
Ondine asks the Queen of the Sea to allow her to become a woman and marry the man she loves. The Queen of the Sea refuses her request, although when she sees her grief and when her friends beg for her she agrees on the condition that Ondine marries Matteo before the petals fall from the rose that the Queen of the Sea gives her. Ondine returns to land to meet her beloved.

Act II
Festival of the Madonna.
Bride and groom are following a religious procession. Suddenly Ondine appears from a well. Only Matteo sees her. He is thrown into confusion. Giannina cannot understand what is wrong with him. She asks him to pray to the Madonna, but instead of the Madonna, Matteo´s eyes are fixed on Ondine.
Dressed as a peasant woman, Ondine arrives at the festival. Matteo is once again thrown into confusion. The sounds of a mandolin being played by a young sailor interrupt a tarantella. Giannina is disturbed by the melody. Matteo wishes to dispose of his rival and is staggered to discover that the young boy is Ondine trying to enchant him. Giannina is preparing for the wedding. Matteo remains with the fishermen. Thunder peals. The fishermen seek shelter. Matteo remains alone on the shore. The beauty of the lightning reflected upon the sea fascinates him. There is a glow from the water, and Ondine appears with her friends. She beckons him to follow her, trying to make him give up his betrothed. Matteo resists. Ondine throws herself into the sea with the other naiads. Matteo, astounded at what he has seen, loses consciousness. Matteo´s mother is searching for him on the shore. Giannina appears in her white wedding dress. The young couple board a boat to sail to the church. Matteo's mother covers Giannina´s head with a veil.
The naiads follow beneath the boat. They appear to Giannina and call for her to follow them. Giannina removes her veil, leans over towards these strange creatures and, losing consciousness, falls into the water. The naiads draw her to the seabed.
Matteo, lost in his thoughts, does not notice his fiancée has vanished. Ondine appears from the sea and takes Giannina´s place in the boat. She is in a white dress, her head covered with the veil Giannina left behind.
The boat approaches a deserted shore. The moon is shining. Matteo gets off the boat with Ondine. He is insanely happy and declares his love to Ondine. Tears of anxiety pour down Ondine´s face. But she senses someone is following her. Matteo explains that it is her shadow. Ondine is surprised – she has become mortal. She dances, playing with her own shadow.
Matteo suggests sailing on so they can be married. She gives him her hand and suddenly feels that her heartbeat is faltering. The rose hidden in her corsage reminds her of her pledge to the Queen of the Sea. A petal falls from the rose. Ondine urges Matteo on.
Matteo and Ondine are in the church. The priest wishes to unite them as man and wife but at that very moment the remaining petals fall from the rose. "Too late, I am your wife, but I am dying," Ondine says. Failing to understand, Matteo removes her veil and kisses her. All are amazed – it is not Giannina. Everyone leaves Matteo. The plaintive naiads appear from the sea. Ondine kisses Matteo and falls dead at his feet.
The sea washes the shore. The waves seize Ondine. Matteo sees the woman he loved carried away for ever. Matteo throws himself into the sea and disappears with his beloved amidst the waves.