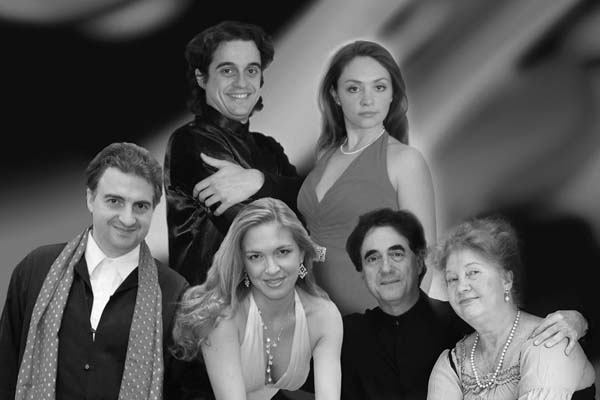 It is hard to imagine a family of musicians where the parents would not want their own children to be musicians. There are several explanations for this. First, it is convenient: the older generation introducing the younger one into a working world where they, the elder ones, know their way about, and can thus offer their children any assistance with problems they face in life. Secondly, there is the feel-good factor – someone you love is making music, i.e. doing something that you yourself, as a musician, love with sincerity and deep conviction. And, lastly, it is natural: in a family of musicians, the children, as a rule, have a natural ability for music – so why should they go off and try something else?

The proofs of this are so many that there is no room for them here. Even if we don´t touch the shadows of Bachs and Couperins and other great musical families (or rather dynasties), we can almost name through guess work the names of famous Russian contemporaries whose children and grandchildren continue the work of their fathers and grandfathers: Shostakovich, Neigauz, Gilels, Oistrakh, Rozhdestvensky… This glorious tradition is one maintained by the Mogilevskys.

Here, too, is a family that goes back at least four generations. The very eldest (Leonid Mogilevsky) was a brilliant cellist who performed alongside Rakhmaninov. Serafima Leonidovna Mogilevskaya, a pupil of Genrikh Gustavovich Neigauz, taught for many years at the Odessa Conservatoire, and to this day (as happens only in Odessa) remains a legend and the darling of his city. The eldest generation of Mogilevskys, including Yevgeny Mogilevsky´s wife, Olga Rumshevich, are wonderful St Petersburg (Leningrad) musicians, whom I have the pleasure of knowing personally, as I studied at the music school where they worked. Olga´s father conducted the school orchestra (and resembled conductor Bruno Walter not only in terms of appearance but also with regard to the way he communicated through music), while his mother taught piano and was seen as the crowning glory in the galaxy of rare teacher-pianists at the times.

The middle generation includes the most renowned Mogilevsky of all – Yevgeny. At the age of nineteen, he became the winner of the International Piano Competition in Brussels, and in the world of music there is not, and never has been, a more prestigious competition or, consequently, such a prize. And at the time, Mogilevsky was a first-year student of the Moscow Conservatoire (under Neigauz) and all credit to the Competition jury, which was able to give a just verdict of this brilliant, gifted young musician. It cannot be said that thereafter the Mogilevskys´ path was an easy one – there have been plenty competitors and ill-wishers, but the destiny of this talented musician and performer has always been a lucky one, because his public has always been with him, loving him and faithful to him. And how could you not love Yevgeny Mogilevsky? That romantic, from his head to his toes, this poet-at-the-piano? That is how he is loved and even today, long since a real maestro, a professor of the Brussels Conservatoire (Brussels again!) … and the father of two wonderful pianists.

The oldest, Maxim, began to give recitals at the age of thirteen (his father first appeared at the age of eight – it seems that this kind of early start is written in the Mogilevskys´ bloodline. The Moscow Conservatoire, then training in the USA (under Alexander Toradze) – and for over two decades now Maxim Mogilevsky has been playing all over the world, giving concerts at the most prestigious concert venues, appearing with the greatest conductors (working with Valery Gergiev being a particular honour). Well, he leads a life somewhat typical of the artistic elite, but Maxim is fully deserving of his fame, he works tirelessly and, of course, becomes ever greater and more interesting as a musician.

The youngest Mogilevsky – Alexander – travelled almost exactly the same path: the Moscow Conservatoire, early success as a pianist and subsequently an intense performing career in Europe and his debut in the USA with the Mariinsky Theatre Orchestra under the baton of Valery Gergiev. Apropos, the youngest Mogilevsky is a brilliant performer of a work that has almost become a family talisman, Rakhmaninov´s Third Piano Concerto – his father, too, was once famed for his interpretation.

If three of the members in this family are male recitalists, then the role of the woman – wife and mother – will inevitable be that of “accompanist”, meaning the function of being the provider of life support and – in the direct sense of the words – taking part in the husband-and-sons piano ensemble. Olga Rumshevich is a brilliant pianist (a pupil of Nadezhda Golubovskaya at the Leningrad Conservatoire), she has performed solo programmes, she has performed piano concertos, but now, most often, she appears on the stage to perform family duets. The Mogilevskys have been partnered by Svetlana Smolina and Yulia Zaichkova – gifted performers with rich artistic biographies, but partnering such musicians as the Mogilevsky pиre and fils would satisfy any artistic ambition.

The Mogilevskys´ schedule is booked years into the future. But St Petersburg, the Mariinsky Theatre and concerts with Gergiev never fail to act upon them like a super-strong magnet. And that I find truly delighting – the more so as the Mogilevsky family has long been part of the landscape of my own life.