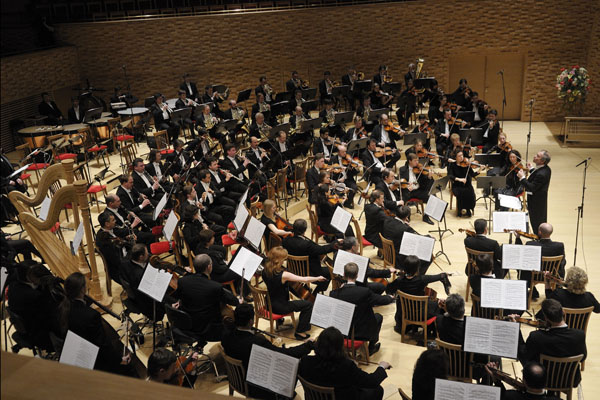 
Written in 1800, the First Symphony opened a new century. But much of its content is a tribute to Mozart, Beethoven´s great predecessor. Beginning with the tonality and ending with exchanges of motifs in the finale, the symphony hints of the grandiose Ninth Symphony of the great Salzburg teacher´s student. But for all that is reminiscent of Mozart in the First Symphony, it it obvious that it brought the world a symphonic conductor of a new age – with other accents, a different concentration of will and a different idea. After the world premiere of the work in Vienna on 2 April 1800 the General Musical Newspaper published a review stating "At the end of the concert his symphony was performed, an exemplary work of art, full of novelty and a richness of ideas. We note, however, the too frequent use of woodwind instruments; it could be thought that it is a work rather for a military than a symphony orchestra."

"In this symphony ... the totally inconceivable, the wonderful power of Beethoven's creative genius emerged for the first time."
P. I. Tchaikovsky

When he approached the sketches of Eroica, Beethoven admitted: "I am not fully content with my previous works, from now on I want to choose a new path." "Starting with Beethoven there is no new music that does not have an internal programme," as, one century later, Gustav Mahler defined the contribution of the composer who had imbued the symphony for the first time with the spirit of pan-human, philosophical ideas.

Starting with Beethoven's Third Symphony, Eroica, it became possible to speak of symphonism: today this term is used not just for orchestral works, even going far beyond the confines of music itself. Symphonism encompasses the dialectics of the development of artistic images, their battle as they develop and the confirmation of the central idea of the work. Of course, Beethoven, in his own words, was "standing on the shoulders of giants", and symphonism as an artistic method had evolved over many centuries in European culture. And yet... Starting with Beethoven...

A confirmed republican, the composer intended to dedicate his symphony to Napoleon. One of Beethoven's favourite pupils, the pianist and composer Ferdinand Ries recalled: "This symphony was conceived in connection with Bonaparte when he was still the first consul. Beethoven had an extremely high opinion of him and compared him with the finest consuls of Rome. I and other close friends of his often saw this symphony among the scores on his desk; at the top of the title sheet the word ‘Buonaparte' and down below ‘Luigi van Beethoven' and not another word more... I was the first to bring him the news that Bonaparte had crowned himself Emperor. Beethoven was furious and cried out ‘He, too, is an average little man! Now he will trample every right of man underfoot, he will pursue only his own ambition; he will place himself higher than others and turn himself into a tyrant!' Beethoven came to the table, seized the title sheet, tore it demonstratively in two and threw it onto the floor." The new title sheet of the symphony read Eroica.

These aforementioned events took place in May 1804. Soon, in summer and later in December that same year, Beethoven twice performed Eroica at the estate of his influential benefactor Prince Franz Lobkowitz. The first public performance of Eroica under the baton of the composer took place on 7 April 1805 at the Theater An Der Wien. One newspaper wrote that "The public and Herr Beethoven, who was himself conducting that evening, remained unimpressed by one another. For the public, the symphony was too complex and too long, and Beethoven was too impolite, because he did not even bow his head in the direction of those who applauded, in fact quite the reverse - he considered the success insufficient."

Everything was new in Beethoven's new symphony. "In terms of the subject," wrote A. Serov, "and in terms of the grandiose scale of this symphony, an entire chasm separates it from its predecessors (the First and the Second). Here we have not just the play of sounds and musical forms... Here we have a specific task for each section, the gradual embodiment of one and the same idea." The "new" was the "eagle allegro" (A. Serov) with its gigantic scales, the variety of musical themes, the impressive size of the development, the majesty of the main idea... New, too, was the funereal march - a mournful procession - the developed programme, symphonic scene that took the place of the traditional Adagio. In a new way, the whirlwind of an impetuous, heroic scherzo seizes us, definitively throwing off the chains and fetters of minuet etiquette. And, lastly, totally "new" were the finale's variations on the Eroica theme: here Beethoven teaches a lesson to future generations, showing "from what waste there grow" great musical ideas. The simple dance motif of contredanse composed ten years earlier (1795) for the artists' annual ball was used by the composer as the basis for the final part of the ballet Die Geschöpfe des Prometheus (1801). One year later (1802) contredanse was to become a theme in the piano variations, Op. 35.

In the finale of the symphony, Beethoven subjects the theme to a series of brilliant transformations, "growing" the majestic and heroic apotheosis from social dance.
Iosif Raiskin