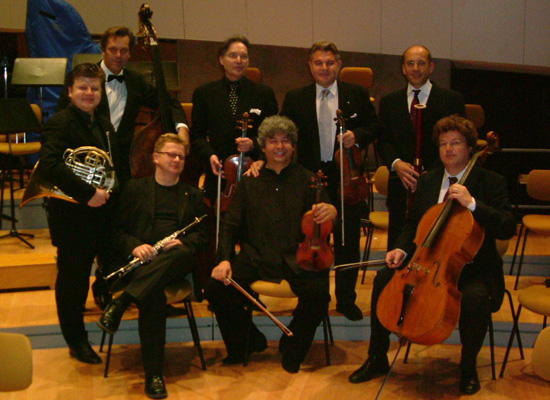 The Philharmonische Oktett Berlin was established over seventy years ago and, like many chamber music ensembles formed by musicians of the Berlin Philharmonic, it appears in all major cities throughout Europe and the USA. Great names and musicians of international repute, such as former Berlin Philharmonic Orchestra leaders Spivakovsky, Rhén and Borries, cellists Pyatogorsky, Gaudan and Steiner, clarinettist Bürkner and double bass player Zepperist, are all recorded in gilded lettering in the ensemble´s annals of history.

While before the end of World War II the orchestra toured only around Europe, after the War it began a new stage of its concert performances across the Atlantic. In 1954 the Oktett completed its first seven‑week tour of South America. The musicians also went on two major tours in Africa and in Japan, Korea and China, Malaysia, New Zealand and Australia. Already by 1978, there were concerts in Israel and the former USSR. The ensemble is also a frequent guest at festivals in Salzburg, Lucerne and Berlin.

The ensemble´s music repertoire is based on Beethoven´s septet and Schubert´s octet. Alongside these, the ensemble performs many classical and romantic works where violins appear together with wind instruments, for example in the major clarinet quintets by Mozart, Weber and Brahms. In 1958, Paul Hindemith composed an octet for the orchestra, which was premiered in Berlin. Hindemith performedt he role of first viola. These concerts were followed by music by music by contemporary composers including Blacher, Henze, Stockhausen, Isang Yun and Rihm.

The Philharmonische Oktett Berlin has made numerous recordings with Deutsche Grammophon, Philips, Sony and EMI. Together with Nimbus Records, the musicians have recorded Hindemith´s octet, Beethoven´s septet and Schubert´s octet on two discs which were acclaimed by critics as an outstanding collectors´ recording edition.

Wolfgang Amadeus Mozart completed his Quintet for Two Violins, Viola, Cello and Clarinet in A Major, K. 581, on 29 September 1789 in Vienna, and on 22 December the same year its premiere took place at a charity concert in aid of retired musicians. The clarinet role was performed by Anton Stadler, to whom the work is also dedicated. Stadler was Mozart’s comrade-in-arms at the Masonic Lodge and an outstanding clarinettist of his own time who was able to draw the then little popular clarinet to the forefront of virtuoso solo instruments. In addition to the Quintet, Mozart also dedicated his Clarinet Concerto to Stadler.

The sound of the clarinet was often accompanied by Masonic rites, and so in Mozart’s portrayal this instrument had, besides all else, a sacred, mystical significance. The Quintet in A Major, K. 581, in the words of Mozart researcher Alfred Einstein is “the most refined image of chamber music, although the clarinet also appears here as first among equals, and is so used by the composer as if he, Mozart, were just discovering the delights of this instrument – its soft, sweet breath, its translucent depth, its flexibility”. The principle of the concerto as a “competition, rivalry”, is fundamental in the development of the material in the clarinet Quintet. The matt timbre of the clarinet is clearly distinguishable against the background of the string quartet, whose voices at times appear as an accompaniment, at times creating independent counterpoint lines. The A major tonality was most comfortable for the then A-form clarinet, as well as having a particular shading of love for Mozart. The first section, the sonata allegro, is constructed on the interchange of a light chorale and wide passages of the clarinet, moving into a considerate, somewhat melancholic melody. The second section, the slow Larghetto in D Major is a clarinet serenade set to a measured movement in eight. Full of inexpressible beauty and enlightened wisdom, the clarinet melody is taken up by the first violin, forming an elevated love duet. The third section is a gallant minuet with two trios. In the first trio in minor key, the in the first violin one can hear intonations of the melancholy theme of the clarinet from the first section, the second trio with the clarinet is reminiscent of a folk Ländler, often later used by Schubert. The finale of the Quintet is written in the form of variations. The initial sketch of the finale almost completely foretold Ferrando’s joyous aria from the opera Così fan tutte. However, in the final version there remains a non-insistent theme, somewhat akin to a theme of Haydn. As this melody emerges and develops, it becomes Mozart’s first theme, and the brief, pensive adagio before the return of the theme sounds like a sweet sigh.

“Today’s musical concert by a highly respected musical organisation has ended with a new octet for five strings and three wind instruments by Schubert … The work by Herr Schubert corresponds to its creator’s acclaimed talent. It is light, pleasant and interesting; only, perhaps, for a trifle too long it takes away the audience’s attention,” Vienna’s Allgemeine Theaterzeitung wrote in April 1827 on the first public performance of Franz Schubert’s A Major Octet at a concert by Ignaz Schuppanzigh’s quartet. This remark on “lengthy attention” is not a chance one, the six-part octet lasting over one hour, it is one of the largest works in the chamber repertoire. The large scales of the work are to a great extent linked to the principles of Schubert’s musical thinking. He went down in musical history as a renowned master of song. In turning to the poetry of Goethe and Schiller as well as to amateur poetry, Schubert was able to reflect staggeringly well in music all the shades of mood and disposition, as well as subtle psychological points. Moreover, in the composition of his works there is generally a principle of “taking turn” and competing. Melodies and phrases alternate like clouds on a limitless sea, the major key can suddenly be replaced by minor and vice versa, shades now emerge, now they disappear. Schubert brings his working principle for vocal genres to instrumental music, where development and slowness are connected with the principle of the interchanging of major blocs, just as in a vocal cycle one song succeeds to another. The Octet in F Major for Two Violins, Viola, Cello, Double Bass, Clarinet, Bassoon and French Horn contain features of well-developed, free-flowing story-telling. Schubert wrote this work in February 1824, a difficult period in his life connected with severe illness. However, the mental sufferings in the music are veiled and come through against a background of poetic images of nature and serene life. The composition of the octet marked a departure from reality to a land of naive reverie and in part was linked to his regaining his health and leaving depression behind. In March 1824, his close friend Moritz von Schwind wrote: “Schubert has almost recovered. According to his own words, in a few days of the new treatment he felt that a break had occurred in the disease and that everything had changed. Now he (Schubert) has been working for a long time on the octet with the greatest diligence. If you go to him during the day he says "Hello, how is life?"; you answer "Well" and he continues to write, and then you make yourself scarce.”

The six-part octet is in part close in terms of genre to the ancient suite or to cassation. The prototype for the octet may be seen in Beethoven’s septet, also written for clarinet, bassoon, French horn and strings, only Schubert adds another second violin. The first section and the finale of the octet are written in sonata form with a slow introduction, while the second, third and fifth sections are simple two and three section structures, while the fourth is a series of seven variations on a theme from his own singspiel Die Freunde von Salamanca.