Bruckner. Symphony No. 8
Symphony Orchestra of the Munich Philharmonic 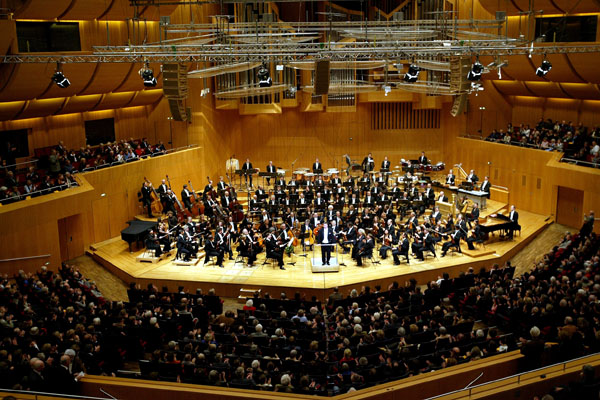 The Munich Philharmonic Orchestra was founded in 1893 on the initiative of Franz Kaim, the son of a piano-manufacturing factory owner, and was initially known as the Kaim Orchester. From the first years of its existence, it was directed by such renowned conductors as Hans Winderstein, Herman Zumpe and Bruckner's student Ferdinand Löwe. Thanks to this, the orchestra was able to demonstrate a high level of performance, and its repertoire was incredibly wide, including a huge number of works by contemporary composers.
From the very first, another important part of the orchestra's artistic conception was its wish to make its concerts accessible to all members of society, thanks to programmes of introductions and its democratic pricing policy.
Between 1901 and 1910 the orchestra first performed Gustav Mahler's Fourth and Eighth Symphonies. The premieres were conducted by the composer himself. In November 1911, half a year after Mahler's death, the orchestra under Bruno Walter first performed Mahler's Song of the Earth. Not long before, the ensemble had been renamed the Concert Society Orchestra.
From 1908 to 1914 the orchestra was directed by Ferdinand Löwe. On 1 March 1898 in Vienna, he conducted a triumphal performance of Bruckner's Fifth Symphony. Ferdinand Löwe was later to conduct works by Bruckner several times, and he established the tradition which exists to this day of performing this composer's symphonies.
During Siegmund von Hausegger's term as Music Director of the orchestra (1920-1938), the ensemble was renamed the Munich Philharmonic Orchestra. From 1938 to 1944, Austrian conductor Oswald Kabast headed the orchestra, brilliantly developing the tradition of performing Bruckner's symphonies.
The first concert following World War II was opened by Eugen Jochum with Felix Mendelssohn's overture to Shakespeare's A Midsummer Night's Dream, his music having been banned during the period of Nazi rule. In the post-war years, the orchestra has been conducted by such outstanding maestri as Fritz Rieger (1949-1966) and Rudolf Kempe (1967-1976).
In February 1979, Sergiu Celibidache conducted his first series of concerts with the Munich Philharmonic. In June the same year, he became the ensemble's Music Director. Together with Sergiu Celibidache, the Munich Philharmonic toured to many cities throughout Europe as well as to South America and Asia. Performances of Bruckner's works were acclaimed as "classical" and to a significant degree raised the international status of the orcestra.
From September 1999 to July 2004, the Munich Philharmonic Orchestra was directed by James Levine. Together with him, the orchestra's musicians completed extensive tours of Europe and America. In January 2004 for the first time in history, maestro Zubin Mehta became the orchestra's Guest Conductor.
In May 2003 Christian Thielemann was appointed the ensemble's Music Director. On 29 October 2004, he conducted Anton Bruckner's Fifth Symphony. On 20 October 2003, the Munich Philharmonic Orchestra had the honour of performing before Pope Benedict XVI at the Vatican. The concert was heard by an audience of seven thousand specially invited guests and the conducting stand was occupied by Christian Thielemann.

In the world of Bruckner’s images Bach’s bleak polyphony, the captivating poetry of Schubert’s Ländler and the spicy, harmonious refinement of Wagner’s Tristan were all miraculously woven together: something at one and the same time patriarchally archaic and innovatively modernistic...
Ivan Solertinsky

I know only one composer who comes close to Beethoven, and it is Bruckner.
Richard Wagner

Bruckner was not aiming to achieve instant success. His art is eternal, and so he worked for all eternity.
Wilhelm Furtwängler

Bruckner is the Schubert of the second half of the 19th century, a Schubert shackled in the armour of slow sounds, mixed up with elements of Bach’s polyphony, the tragic structure of the first three movements of Beethoven’s Ninth Symphony and Wagner’s “Tristanesque” harmony.
Ivan Solertinsky

Anton Bruckner (1824–1896) started work on his Eighth Symphony following the successful performance of his Seventh under Arthur Nikisch – the first and so long-awaited triumph in his troubled life.
The Eighth was to become the most grandiose creation by the great Austrian symphonist: depending on the editing and tempi taken by the conductor, it can last from seventy-five to ninety-eight minutes – not by chance did Brahms refer to Bruckner´s symphonies as «gigantic dragons»!
The Eighth Symphony was completed in 1887 and dedicated to Austrian Emperor Franz‑Josef I. After conductors Hermann Levi and Felix von Weingartner rejected the honour of being the first to perform it, admitting that they could not understand it, Bruckner made serious amendments to the score, cutting many sections. In this new version, the Eighth was first performed in Vienna on 18 December 1892 under Hans Richter. The symphony also exists in a version by Robert Haas, which he called «the original». In actual fact, in striving to create some kind of ideal version, Haas drew on both of the composer´s own versions.
Raising the structures of his symphonies, Bruckner calculated their proportions with mathematical precision. Of all «architectural» works, it is his scores that most resemble majestic Gothic cathedrals. The composer´s adherence to polyphony gives his orchestral texture depth and varied measure, it is as if the musical material is growing out of its own self, endlessly striving upwards. The slow, secondary theme of the finale in the Eighth grows from the unison of the violins, violas and French horns. For Bruckner, his favourite description of the nature of music was feierlich (celebratory, festive); in the Eighth Symphony, this definition is also attached to the third and fourth movements.
The legacy of such a typical introvert as Anton Bruckner contains no programme works, but his symphonies are more than «absolute music». Viennese critic Eduard Hanslick reproached him for his apparently simple arrangements of Wagner´s musical dramas into symphonic form. This is, of course, an exaggeration, but Wagner actually did help Bruckner find his way in music in the 50s, and, if at first this was to the composer´s detriment, then by the 1880s the new wave of Wagnerian fashion brought his works to a vast and delighted public.
In Bruckner´s last three symphonies, the composer turned to the grandiose orchestral composition of Der Ring des Nibelungen, and «Wagner´s tubas» among other things. Their timbre particularly adorns the quiet episodes, especially the final bars of the Eighth´s Adagio. It is from Wagner that we have the epic scale of Bruckner´s symphonic canvases and his heroic style. On the other hand, the composer was a practising Catholic, a composer of spiritual choral music, and in his symphonies (particularly in the slow sections) there are many points whose mystical nature, depending on the conductor´s interpretation, can appear on the surface or be altogether concealed.
The main culmination of the entire symphony also owes its «look» to the conductor: in his day, Arthur Nikisch advised the composer to add a clash of the cymbals to the culmination of the symphony´s slow movement. Bruckner made a repeat use of this technique in the Adagio of the Eighth.