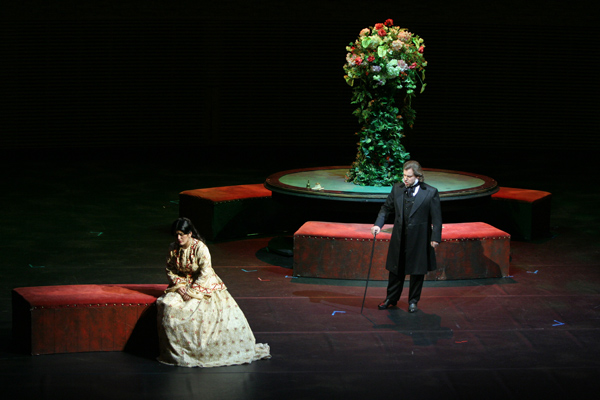 It is hard now to believe that an opera as much-loved throughout the world as La Traviata could have flopped so spectacularly at its premiere. The first performance of the opera – on 6 March 1853 at the famous Teatro La Fenice in Venice – almost ended in scandal. Part of the audience shouted aggressively and laughed out loud, whistling their extreme disapproval. On the next day, the reviewer from one paper wrote that: "The sotto voce music of the final act cannot be heard. It is drowned out by the audience´s laughter." Verdi himself wrote to a friend: "La Traviata yeasterday was a fiasco. Who is to blame, me or the singers?... Time will tell." The composer could only guess at the reasons – the renowned prima donna Fanny Salvini-Donatelli had such a full figure that it was impossible to believe her Violetta was dying of consumption; the tenor Ludovico Graziani (Alfredo) had a cold; the baritone Felice Varesi (Giorgio Germont) had not learned his part properly... If only that had been all! Verdi had brought to the stage the heroine of Alexandre Dumas fils´s play La dame aux Camélias – a demimondaine (in Italian la traviata means "the fallen one") whose existence is shown as pure and unselfishly loving when compared with the deceits and corruption of ´polite´ society. The composer knew the risk that he was taking when he wrote to a friend: "The subject is contemporary. Others might not attempt to broach it because of propriety, because of the age, or because of a thousand other silly prejudices... I broach it with the greatest pleasure." If only Verdi had followed centuries of tradition and chosen a love story with nymphs and cupids, or at least taken his characters from a distant age, then ´polite´ society would probably have welcomed his new opera. But when it was contemporary characters on the stage instead of mythological figures or the heroes of knightly romances? When the action doesn´t take place in ancient ruins or a medieval castle? When the heroes wander round not in classical togas or crusader armour, but in the latest Paris fashions? Sorry, no! We´ve come to the opera, and we expect everything to look like an opera! (It´s worth noting in brackets that contemporary directors are universally enamoured with the conceit of dressing all their characters – from Wagnerian gods and Shakespearian heroes to the characters of Glinka and Mussorgsky – in modern suites and miniskirts).

A year later, on 6 May 1854, La Traviata was performed with triumphant success on the stage of another Venice opera theatre, San Benedetto. While making almost no changes to the score, Verdi submitted to the tastes of music-lovers and opera-goers: the characters were robed in historic costumes. "Thank God they´re not us!", sighed the ´polite´ audience with relief. They did not notice the most important aspect of Verdi´s new opera, or rather without noticing that they were being taught what was most important – the new language. New not in the sense of radical innovation in harmonics or orchestration, but new in the essence and dignity of the music itself, in the honesty and naturalness of the musical speech, and in the truth of the emotions. This was what forced (taught!) the audience to empathize with the heroine, who was transformed from a product that could be bought into a human being with loves and passions. This was what made La Traviata an opera for everybody – in other words, a true masterpiece.