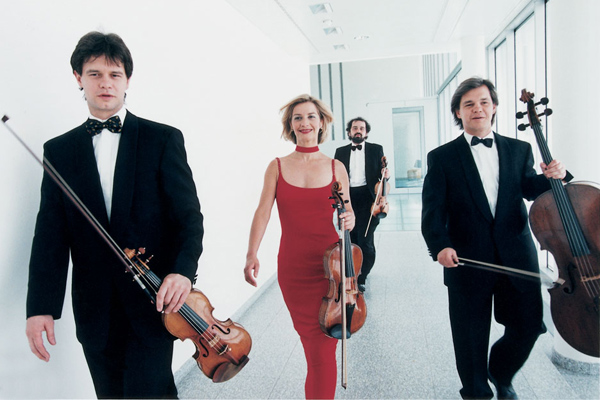 The Hagens seem to take nothing for granted, thinking afresh about each tempo and, in almost every bar, what style of expression, what tone colour to adopt ... [an] important aspect of the performances is the way in which they draw us into Beethoven´s emotional world through the sheer beauty of the playing, and the way each detail is particularised.
Gramophone Awards Issue

The Hagen Quartet is made up of three members of one Salzburg family – Lukas, Veronika and Clemens Hagen – and the German violinist Rainer Schmidt, who joined the quartet in autumn 1987, replacing Annette Bik. The three Hagens studied at the Salzburg Mozarteum: Veronika and Lukas were students of Helmut Zehetmair; Clemens´s teacher was Wilfried Tachezi. Rainer Schmidt studied in Germany, Canada and the USA, where he attended the Cincinnati Conservatory under the tutelage of Walter Levin and Dorothy DeLay. Hatto Beyerle, Heinrich Schiff and Oleg Maisenberg also played important roles in the artistic development of the musicians. The meeting with Nikolaus Harnoncourt helped to expand their field of musical vision, as did the friendship and artistic relationship with Gidon Kremer, who has regularly involved the ensemble in his chamber-music projects at the Lockenhaus Chamber Music Festival.
The Hagen Quartet is committed to interpreting works by contemporary composers alongside their explorations of the rich heritage of the quartet repertoire stretching back to Bach. The ensemble´s international fame begins in 1981 when they take part in the Lockenhaus Chamber Music Festival and win the "Prize of the Jury" and the "Audience Prize". In 2002 they were invited as special guests to the famous New Year´s Day Concert of the Wiener Philharmoniker, which is broadcast to 800 million people around the world. In 2006 to coincide with Mozart´s 250th birthday celebrations, the Hagens play an all-Mozart programme on tour in Japan and China as well as in Italy, the Netherlands, Hungary, Germany, Switzerland and Austria.