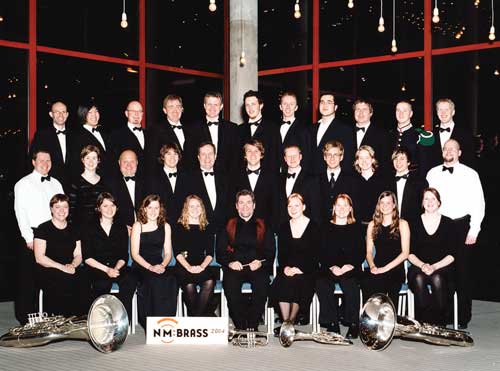 Jaren Hornmusikkforening was founded in 1936. The development of the band, musically took off in 1980 when the band participated in the Norwegian Brass Band Championship for the very first time. Since then, the band has had only one direction, and by working systematically the results have been good. The band today consists of 30 musicians. They are all amateurs, but some of the musicians in the band study or have studied music. You will find them in lead positions in the band. Every Tuesday, and about one weekend every month, the musicians meet for band rehearsals. In a year the band perform about ten concerts, and they participate in the the elite section of the Norwegian Brass Band Championship, set in Bergen.
The band also annually participate at the Siddis Brass Band Competition in Stavanger, as well as local contests such as the Oppland and Hedmark Band Championship (counties) as well as other local contests. From being a middle band, Jaren has climbed up to be among the best in the country.

Over the last years, the band has also traveled outside Norway on Concert Tours. We can mention Great Britain, Hungary, Iceland and the Czech Republic among others. The band also went on an extended concert tour of Russia, Easter 1998, visiting the cities of Moscow, Saratov, Togliatti, and Ulianovsk.

The official kingdom of Norway is a constitutional monarcy in northern Europe. Oslo is Norway's capital and largest city. Norway borders to Sweden, Finland and Russia. Jaren Hornmusikkforening is from Jaren, which is the administrative centre of Gran municipality. Jaren has about 3000 inhabitants, Gran about 13.000 altogether. It is located about 80 kilometres from Oslo.

Jaren is a band with just brass instruments and percussion. Especially in Great Britain, there are strong traditions for brass bands, while in the continent of Europe it is more popular with wind bands. This may explain why we find the most of the Norwegian brass bands in the Western part of the country. In Norway there are brass bands for musicians of all ages. Annually the Norwegian Brass Band Championship is held in Bergen. There are five sectons: elite, and 1st to 4th section. Jaren Brass Band has participated in the Championship since 1980, and has the last 10 years participated in the elite section. The Norwegian wind-and brass bands are numeorous. They count almost 70.000 musicians organised in 1700 bands.

The music written for brass bands range over most musical genres, from classical transcriptions, to contemporary original work to the ligher show music. Over a year, Jaren holds many different types of concerts and plays a variety of repertoire. Examples of annual traditional concerts are: Midnight Christmas Concert at Tingelstad Church, Concerts for children (with choreography and storytelling), Gala Concert at the local county Band Championship, Celebrational Concert during Norway's constitutional day, Concerts where we cooperate with choirs, and so on.
Шrjan Matre, a former musician of the band, now graduated as composer from the Norwegian Academy of Music Oslo, has on many occasions been commisioned to write or arrange music for the band. Among these pieces we find the quite modern test piece, "Klang(!)" which some years later it was written was chosen as the Test Piece for the elite Section in the Norwegian Brass Band Championships. The band has also had the oppurtunity to work with some of the best conducturs of Norway, and on occasions they have also been under the baton of international conducturs. On the 2009 tour of Russia, Jaren will be conducted by the talented and well known Bjшrn Sagstad.