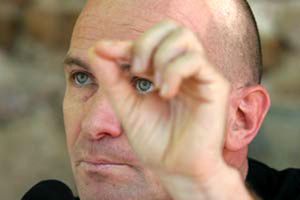 Stage Director
Carlus Padrissa was born in Barcelona. Aries. Self taught and ambidextrous. Founding member of the theatre group La Fura dels Baus, established in 1979. Has taken part in productions of Accions (1984), Suz/o/Suz (1985), Tier Mon (1988) and Noun (1990), together with Miki Espuma being responsible for the musical accompaniment and recording.
Together with the company La Fura dels Baus he has toured to four of the world’s continents. In 1992, together with Alex Ollé he directed a production of Mar Mediterrani, mar Olímpic to music by Ryuichi Sakamoto. This was performed in 1992 at the opening ceremony of the Barcelona Olympic Games, seen by a TV audience of over five hundred million viewers. The next year, he single-handedly directed the macro-production L’Enderroc (1993), involving the use of several excavators, the Belvitge Brass Orchestra and the Jordi Arcarons bikers.
He initiated and has been Artistic Director of the productions MTM (1994) and BOM EXPERIENCES (1994–1995). At the showing of these productions, innovative technology was used for the very first time – each of the productions was performed at exactly the same time in different places and each was connected to the other by a video link. Following the experience, Carlus Padrissa published a manifesto.
He has also collaborated with Pep Gatell and Jürgen Müller on TV’s Work in Progress (1995-1997). Together with Alex Ollé, sculptor Jaume Plensa and video director Franc Aleu he staged productions of Atlàntida (Granada, 1996), The Martyrdom of St Sebastian (Rome, 1997), La Damnation de Faust (Salzburg, 1999), Die Zauberflöte (Bochum, 2003), The Diary of One Who Disappeared and Duke Bluebeard’s Castle (Paris, 2007).
Together with Alex Ollé and designer Roland Olbeter, he worked on productions of Faust 3.0 (1998) and XXX (2002). Together with Sergi Jordà, he created the FMOL musical instrument (1998); With Hansel Cerezo, he directed the macro-production L’home del mil•lenni (1999) in which a gigantic androgynous being made out of one thousand people and thirty-three thousand internet users opened its arms to welcome the new millennium. Together with Isidro Ortiz and Alex Ollé he worked on the film Faust 5.0 (2001), which received an award as best European science fiction film. He has created stage costumes with fashion designers including Issey Miyake, Christian Dior and Jean-Paul Gaultier. He has staged a production of La navaja en el ojo for the grand opening ceremony of the Valencia Biennale, dedicated to connections between various art disciplines.
He has directed the premiere of the opera Don Quijote en Barcelona together with architects Enric Miralles and Benedetta Tagliague, cinema director Emnanuel Carlier, costume designer Chu Uroz and co-director Alex Ollé, as well as the premiere of the opera Bajo los acantilados de mármol, together with director Valentina Carrasco.
Currently he directs the artistic activities of The Naumon Ship – an old cargo ship sixty metres long weighing one thousand one hundred tonnes which has been transformed into a cruising contemporary cultural centre. The ship is a moving venue for art and cultural exchange, and its main wine cellar provided the inspiration for the stage direction of Wagner’s tetralogy, a co-production of the Palau de les Arts Reina Sofía in Valencia and the Maggio Musicale Fiorentino. In 2008 together with Pere Pinyol he staged a production marking two centuries since the execution of the Madrid patriots by soldiers of the Napoleonic army on 2 May 1808. Together with Roland Olbeter and Franc Aleu he has directed a production of Stockhausen’s opera Michaels Reise um die Welt  (2008), which was premiered in Vienna and later staged in Cologne, Venice, Dresden and Paris.