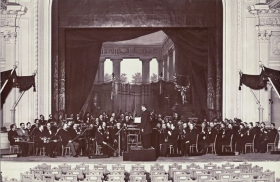 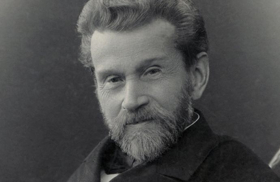 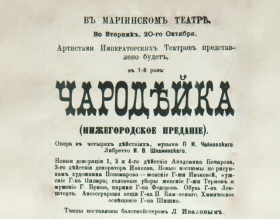 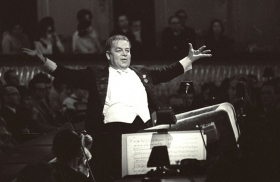 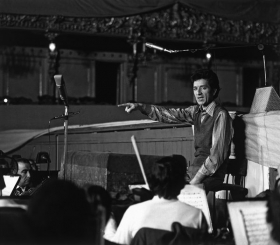 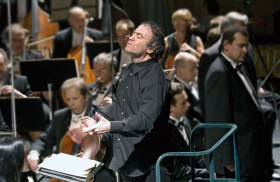 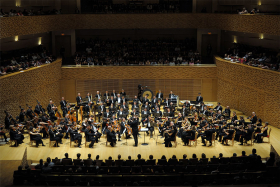 HISTORY OF THE MARIINSKY ORCHESTRA

The Mariinsky Orchestra is one of the oldest in Russia. Its history dates back to the first orchestra of the St Petersburg Imperial Opera Orchestra, covering a period of over two hundred years.

In the distant past, the orchestra of the Board of Imperial Theatres emerged and developed its activities under two conductors. The first of them was composer Caterino Cavos (from 1803 Principal Conductor of the Russian Opera Theatre and, from 1832, Director of the Imperial Theatres´ Orchestras). As head of the ensemble, Cavos conducted not just premieres of his own numerous operas, but was musical director of productions of Mikhail Glinka´s opera A Life for the Tsar. Moreover, he was involved in the Russian premieres of operas by foreign composers – Cimarosa´s Horatii and Curiatii (1815), Weber´s Der Freischütz (1824), Bellini´s I Capuletti e i Montecchi and Rossini´s Semiramide (1835) and Le Compte Ory (1838) among others.

In spring 1847 at the Bolshoi Theatre in St Petersburg, together with the orchestra of the Board of Imperial Theatres and guest musicians who had travelled to Russia with him, Hector Berlioz conducted two concerts, performing his Roméo et Juliette dramatic symphony for soloists, chorus and orchestra.

Cavos was succeeded by outstanding musician Konstantin Lyadov (from 1850 Conductor of the Russian Opera and from 1860 Principal Conductor of the Mariinsky Theatre). Under his direction, the Theatre saw such significant opera premieres in the history of music as Glinka´s Ruslan and Lyudmila (1842), Dargomyzhsky´s Rusalka, (1856), Serov´s Judith (1863) and Rogneda (1865), as well as Wagner´s Lohengrin (1868), Gounod´s Faust (1869) and Meyerbeer´s Le Prophète (1869).

The Mariinsky Orchestra truly began to flourish in the many years it was led by Eduard Nápravník (from 1863 and 1867 Assistant Conductor and Organist; from 1867–1869 Second Conductor and from 1869–1916 Principal Conductor). Over fifty-three years´ work at the Theatre, Nápravník learned and staged seventy-nine operas, moreover performing a further thirty operas prepared by other conductors. Nápravník´s services to Russian opera were truly immense and indisputable.

A brilliant musician, composer and manager of all of the Theatre´s musical events, with his indisputable authority and example he succeeded in raising the Orchestra to European levels. Nápravník conducted his own operas, staged at the theatre in the capital´s main theatre. Often his operas were also conducted by Anton Rubinstein. The first four premiere performances of The Enchantress in 1887 were conducted by the composer Pyotr Tchaikovsky himself. Gustav Mahler appeared with the Mariinsky Orchestra, in March 1902 and in November 1907. 5 November 1908 saw the famed production of Die Walküre under Arthur Nikisch, and two years later the renowned conductor again appeared at the conductor´s stand with Wagner´s Tannhäuser. In 1912, Sergei Rachmaninoff conducted The Queen of Spades six times.

In late February and early March 1889 came the illustrious tour by Angelo Neumann´s German Opera Company. Russia staged its first performance of Wagner´s tetralogy Der Ring des Nibelungen. German singers performed with the Mariinsky Orchestra under famed conductor Karl Muck. Nine years later the Orchestra performed during the tour of another German opera company under K. Lewe. There were productions of operas by Richard Wagner, Johann Nepomuck Hummel, Charles Gounod, Karl Goldmark, Pietro Mascagni and Nicola Spinelli. Many of these operas were performed in Russia for the first time, and the name of Karl Richter stands out among the conductors of the time.

The Orchestra´s professional level unfailingly rose thanks to the musicians´ devotion. Several of their names have long since become well-known outside the Theatre, many of them teaching at the Conservatoire and training a new generation to take over: V. Valter, E. Kruger, Ye. Khait, Ye. Wolf-Israil, A. Verzhbilovich, A. Vasiliev, N. Nagarnyuk, M. Buyanovsky, P. Volkov and A. Chulyukin to name but few.

Business-like, conscientious and surprisingly modest, Nápravník, envisaging a full-sounding orchestra, tried to draw talented musicians to work at the theatre. He invited the stunning virtuoso musician Felix Blumenfeld, who from 1895 was a coach with the Opera Company, and from 1897–1918 a conductor. In 1908 he conducted Musorgsky´s opera Boris Godunov in Paris to immense acclaim. He also rehearsed and supervised productions of the operas Nal and Damayanti Аnton Arensky, Rubinstein´s Nero and Feramors, Rimsky-Korsakov´s Servilia and The Legend of the Invisible City of Kitezh and the Maiden Fevronia and Wagner´s Tristan und Isolde. Mariinsky Theatre conductor and ballet composer Riccardo Drigo worked from 1886.

In 1908 the Theatre invited young conductor Nikolai Malko. For nine years (1910-1919) the conductor´s stand was taken several times by Britain´s Albert Coates, who directed productions of the operas Khovanshchina by Musorgsky, Puccini´s Madama Butterfly, Wagner´s Der Fliegende Holländer and Richard Strauss´ Elektra. He was the first to hear the delighted ovations of Richard Strauss with regard to the orchestra when he came to St Petersburg in 1913 for the premiere of his opera. In 1910 the Theatre had invited another young conductor, Daniil Pokhitonov, who dedicated his entire life to the ensemble. Several times the renowned Moscow conductor Vyacheslav Suk came on tour to St Petersburg. After the Revolution, musical affairs at the Theatre were headed by Emil Cooper, who appeared as Principal Conductor until 1924. Nápravník´s baton was then passed on to subsequent conductors in the Soviet era – Vladimir Dranishnikov, who introduced new composers to the Theatre´s repertoire, and Yevgeny Mravinsky, who began his glittering career with the Orchestra. They were followed by such vivid personalities as Ariy Pazovsky, Sergei Yeltsin, Boris Khaikin, Pavel Feldt, Konstantin Simeonov and Yuri Temirkanov, each of them perfecting the Orchestra´s role in opera and ballet productions and scrupulously attaining intonational precision and variety of sound, developing and updating performance style.

In 1978 the Mariinsky Theatre (then still the Kirov) appointed Valery Gergiev Conductor, making him Artistic and General Director in 1996. With maestro Gergiev´s arrival, the Orchestra´s repertoire expanded significantly. In addition to operas (first and foremost the tetralogy Der Ring des Nibelungen as well as all of Wagner´s other operas starting with Lohengrin performed in German, all of Sergei Prokofiev and Dmitry Shostakovich´s operas, the lion´s share of Rimsky-Korsakov and Tchaikovsky´s operatic legacy, both of Musorgsky´s versions of Boris Godunov, operas by Richard Strauss, Leoš Janáček, Mozart, Puccini and Donizetti) the Orchestra´s repertoire has come to include symphonic works and other genres of philharmonic music. The Orchestra has performed every symphony by Prokofiev, Shostakovich, Mahler and Beethoven, Requiems by Mozart, Verdi and Tishchenko and works by Shchedrin, Gubaidulina, Kancheli and Karetnikov among many others. In 2008, according to results of a survey of leading music critics from major publications in America, Asia and Europe, the Mariinsky Theatre Orchestra was one of the top twenty orchestras in the world, beating two other Russian orchestras also listed in the ratings.