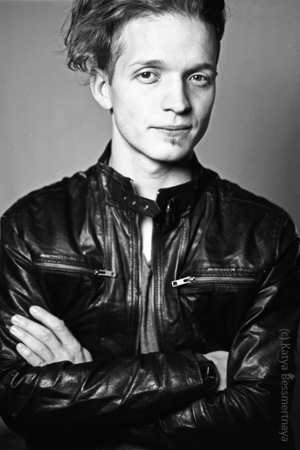 ● Recipient of the Golden Mask, Russia’s most prestigious theatre prize in the category “Best Male Role in Ballet” (2011, 2014)
● Winner of the competition of young choreographers of the contemporary dance festival Context. Diana Vishneva (Moscow, 2013)
● Recipient of the Harlequin national theatre award (2011)

Graduated from the Khanty-Mansiysk branch of the Moscow State University of Culture and the Arts in 2007. From 2008–2012 he was a dancer with the Music Theatre of the Republic of Karelia, performing lead roles in classical and contemporary ballets. He debuted as a choreographer in 2011, staging Igor Stravinsky’s ballet Pulcinella at the Music Theatre of the Republic of Karelia. For the Mariinsky’s Creative Workshop of Young Choreographers he created such works as Window on Deep Midwinter (2013) to the music by Meredith Monk, Gavin Bryars, David Lang and Sigur Rós, Keep Сalm (2014) to the music by Johann Strauss and Anton Arensky, Clay (2015) to the music by Darius Milhaud, and Within (2017) to the music by Daft Punk for the project The Dreamers. In 2017 Boris Tishchenko’s ballet Yaroslavna. The Eclipse choreographed by Vladimir Varnava was premiered at the Mariinsky Theatre, in 2019 he staged Maurice Ravel's Daphnis et Chloé and in 2020 he presented Le Bœuf sur le toit by Darius Milhaud at the Mariinsky Theatre. Other productions include The Beginning (2012) to the music by Erik Satie, Plus. Minis. Zero (2013) to the music by Arvo Pärt, a performance titled The Finnmark Diaries for the festival in Kirkenes, Norway, Overcoat. The Ballet (2013, together with Maxim Didenko) by Ivan Kushnir, The Passenger (2013, together with Maxim Didenko) to the music by Henryk Górecki, György Ligeti and Skin & Soap, The Little Match Girl (2013) to the music by Dmitry Volkov, Diary of a Madman (2014, together with Zhenya Anisimov), Stony Bank (2015) by Alexander Karpov at the Yacobson Ballet Theatre, Mozart and Salieri (2015) after a cantata by Wolfgang Amadeus Mozart and Antonio Salieri, choreography for the musical Zombie Zombie Zombie (2015) by Ivan Kushnir, directed by Nikolai Dreiden, Le Spectre de la rose (2017) to the music by Carl Maria von Weber and Alexander Karpov, Pétroushka (2017) by Igor Stravinsky at the Perm Opera and Ballet Theatre and Ballet Theatre and Mariinsky Theatre, Isadora (2018), Tissues (2018), Goodbye Old World (2020) to the music by Denis Antonovfor Ballet Moscow, choreography for the production Today. 2016… (2016) by Valery Fokin, The Bathhouse (2017) by Nikolay Roshchin, the productions The Circus (2017), Heart of a Dog (2017), Carmen (2019), directed by Maxim Didenko.

Took an internship at the Carolyn Carlson company (France). As a guest soloist performed in Requiem at the Boris Eifman Ballet Theatre and in Gap Filling at the Akhe Engineering Theatre. Takes part in various projects and performances in Russia and abroad.
Information for December 2020