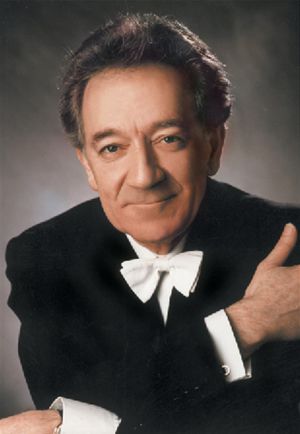 “Speaking of performers who are currently thriving, if Abbado is class, Barenboim is charisma and Haitink is individuality then Temirkanov is brilliance, unpredictability and dazzle.” This memorable review in the Italian press of his recent tour once again underlined the fact that Yuri Temirkanov, Artistic Director of the St Petersburg Philharmonic, Honoured Ensemble of Russia, is one of the present day’s greatest conductors. One of the most recent proofs of his acclaim was an invitation to conduct at Stockholm’s Royal Philharmonic Orchestra at a concert congratulating the Nobel Prize recipients in 2009. One year earlier Temirkanov became the first Russian musician to receive the Abbiati Prize, the most prestigious award of the Italian Association of Music Critics, on two occasions. After this the maestro was appointed Music Director of the Teatro Regio in Parma, his contract running until the Verdi Festival in 2013 which will celebrate two centuries since the composer’s birth.

The conductor’s intense collaboration with internationally renowned orchestras dates back many years. As far back as 1978 Temirkanov began to work with the Royal Philharmonic Orchestra in London, becoming its Principal Conductor in 1992. From 1992 to 1997 he was also Principal Guest Conductor of Dresden’s Philharmonie. In 1998 the London Philharmonic was succeeded by the Danish Radio National Symphony Orchestra (Principal Guest Conductor), and, starting in 2000, for six seasons Temirkanov was Principal Conductor of the Baltimore Symphony.

However, as the maestro admits, all these years his home has been and will remain to be St Petersburg, where for over two decades he has directed the Philharmonic and where his ascent to the peak of music’s Mount Olympus began. In 1966 the postgraduate student of the Leningrad Conservatoire (class of Professor Ilya Musin) won the II All-Union Conducting Competition and immediately became one of the most sought-after musicians of his generation. Together with Kirill Kondrashin and David Oistrakh he undertook a world tour and was invited to perform in the USA, France and Germany. In early 1967 Temirkanov performed at the Great Hall of the Philharmonic, after which Yevgeny Mravinsky asked him to become his assistant. Since 1968 the conductor has directed the Academic Symphony Orchestra of the Philharmonic. He is constantly expanding the ensemble’s repertoire and the orchestra frequently tours to Europe, Japan and the USA.

The maestro’s name is also linked with the resurgence of the Mariinsky Theatre (formerly the Kirov). From 1976 to 1988 the musician was its Artistic Director and Principal Conductor. Over this time the theatre’s repertoire expanded to include such masterpieces as Tchaikovsky’s Eugene Onegin and The Queen of Spades (Temirkanov’s productions of both of these remain in the repertoire to this day), Prokofiev’s War and Peace, Petrov’s Peter I and Shchedrin’s Dead Souls. Under Temirkanov, the company began to tour on a regular basis (the USA, Japan and Europe), and he revived the practice of the theatre’s orchestra performing symphony concerts, both in Russia and abroad.

“How does Temirkanov manage each and every time to create a miracle in his interpretations? It’s a mystery. The brilliance lies in the magnificent sound that beats like a hammer from whatever orchestra he is conducting but particularly when he is conducting his musicians from St Petersburg”( Il Sole 24 Ore, Milan, March 2010).
And truly, in the words of the maestro himself, his priority is working with the Honoured Ensemble of Russia. Having directed the orchestra since 1988, the conductor regularly performs with it in St Petersburg and abroad. In 2005, under Temirkanov the orchestra became the first Russian ensemble to open a season at the renowned Carnegie Hall, and in the season 2006–2007 he revived tours throughout Russia with performances in Moscow and towns in Siberia. Last season the conductor gave concerts with the orchestra in St Petersburg, Moscow, cities in Italy, Austria, Germany, France, Belgium, Luxemburg, Greece, Hungary, Romania, Croatia, countries throughout Europe, Asia and North America (the USA) – these are his touring performances for the 2010–2011 to date.

The maestro’s work has brought him numerous prizes, awards and honorary titles. People’s Artist of the USSR Yuri Temirkanov is a recipient of State Prizes, the Russian Presidential Prize and the Abbiati Prize as “Best Conductor of the Year” (2003, 2007); he is a chevalier of several orders including the order “For Services to the Fatherland”, 1st class, an honorary academician of the Accademia Santa Cecilia, an honorary doctor of the St Petersburg Conservatoire and an honorary citizen of St Petersburg.
Despite the incredibly intense performance schedule, the musician’s life is not restricted to the concert stage. To maintain and develop the legacy of St Petersburg’s spiritual culture, the Maestro Temirkanov International Foundation for Cultural Initiatives was established. In 1998 the conductor founded the Temirkanov Prize, which is awarded on an annual basis to the best students at the Specialised Middle School of the St Petersburg Conservatoire. Each year, one of the highlights of the music season in St Petersburg is the International Winter Festival Arts Square, which is directed by Temirkanov and brings first-class musicians together in St Petersburg.