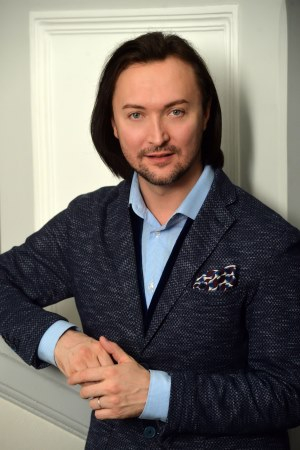 Vyacheslav Starodubtsev was born in Tula in 1981. In 2006 he graduated from the Russian Institute of Theatre Arts (GITIS, workshop of Dmitry Bertman), having specialised in “musical theatre performance”. In 2009 he completed a postgraduate study at GITIS (Department of Stage Directing and Musical Theatre Performance). Kandidat (PhD) in Art History (2011). Member of the Union of Theatre Workers of the Russian Federation.

From 2002 to 2017 he was a soloist and stage director at Moscow’s Helikon-Opera musical theatre where, as a second-year student at GITIS, he made his debut as Janek in the Russian premiere of Janáček’s opera Věc Makropulos (The Makropulos Affair). At that theatre he also performed the roles of Lensky (Eugene Onegin), Belfiore (La finta giardiniera), Don Basilio (Le nozze di Figaro), Actéon (Charpentier’s Actéon), Aléxis (Grétry’s Pierre le Grand), Nathanaёl (Les Contes d’Hoffmann) and Bardolfo (Falstaff) among others. As a director, he created productions of Die Fledermaus, The Love for Three Oranges, Kalmania (based on the operettas of Kálmán), A Gershwin Gala, Vampuka, the African Bride, La finta giardiniera, Le nozze di Figaro, Věc Makropulos, Love Forever (a concert programme of world hits), Sadko, The Playing Man (based on the opera by Sergei Chechyotko).

Has taught acting and directing at the Faculty of Musical Theatre at GITIS (2006–2013) and been Artistic Director of the DO Theatre of Drama and Opera, where he staged the dramas I Am Another Tree, based on the diaries of Andrey Tarkovsky and the memoirs of Margarita Terekhova and set to music by Tariverdiev, and Antonio and Amadeus, based on Alexey Levshin’s play A Meeting Beyond the Clouds. From 2008 to 2011 he was a director at the Galina Vishnevskaya Opera Centre, where he staged The Marriage and Other Horrors (2008; based on Musorgsky’s The Marriage and Sorochintsy Fair, Tchaikovsky’s Cherevichki, Rimsky-Korsakov’s Christmas Eve and May Night and Shostakovich’s The Nose); in 2018, for the first time in Russia, he staged Verdi’s opera Jérusalem. Since 2006 he has performed and taught vocals at the Roman Viktyuk Theatre; performs the role of the First Poet in the production Sergey and Isadora.

As a music consultant and stage director of music scenes, he has been involved in the creation of the TV mini-series Dostoyevsky (2011) by Vladimir Khotinenko, Kuprin. The Duel (2014) and Grigory R. (2014) by Andrey Malyukov.

Has organised and stage-directed international art projects in Tokyo (the literature and music festival The Living Russian Word), New Delhi (Jazz Forever), Benidorm (Spain; Danza de amor), Tallinn (Tarkovski. Peegel. Ma olen teine Puu) and Minsk (Days of Russian Culture). Has penned such lectures and educational and enlightenment projects as Open Dialogues, Reading Opera, The Unknown Tchaikovsky and The Censored Verdi among others. He is one of the organisers of the Moscow Festival of School Music Theatres.

Recipient of the prizes Paradise (Novosibirsk, 2017; for his artistic concept and stage directing of the opera Un ballo in maschera) and Kings of Fine Arts (Novosibirsk, 2020).
Information for June 2021