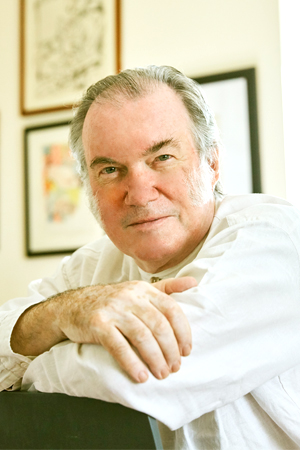 David Pountney CBE was born in Oxford in 1947. He studied at both Oxford and Cambridge Universities. Pountney first gained international recognition in 1972 with his production of Leoš Janáček’s Kátya Kabanová at the Wexford Festival Opera in Ireland. From 1975 to 1980, Pountney was the Director of Productions at Scottish Opera in Glasgow, where he staged a whole cycle of Janáček’s operas (Jenůfa, From the House of the Dead, The Makropulos Case, Kátya Kabanová, The Cunning Little Vixen) in collaboration with Welsh National Opera. Pountney was appointed Director of Productions at English National Opera (based in London) in 1982. His many productions at English National Opera include Der fliegende Holländer, The Gambler, Dvořák's Rusalka, Die Walküre, Orphée aux enfers, Doktor Faust, Carmen, Hansel and Gretel, Kurt Weill’s Street Scene, Falstaff, Pelléas et Mélisande, Wozzeck, The Fairy Queen, and Der Freischütz; the director’s Janáček portfolio also saw the addition of Osud and The Adventures of Mr Brouček. Pountney’s strong interest in the 20th century operas is widely known; he worked on the productions of Michael Tippett’s The Midsummer Marriage and Robin Holloway's Clarissa at English National Opera. The director went on to stage operas by Berg, Schönberg, Zemlinsky, Weill, Britten, Zimmermann, and Mason.

In 1992, Pountney began working as a free-lance director at the Zurich Opera, the Wiener Staatsoper, the Bayerische Staatsoper in Munich, and other houses in the United States and Japan. In the United Kingdom, he regularly collaborated with the Opera North in Leeds and the Welsh National Opera. In 1989, Pountney made his debut at the Bregenz Festival (Austria) with Der fliegende Holländer. He became the Intendant of the Bregenz Festival in 2003, a post he held until 2014. In 2011, he was named head of the Welsh National Opera.

David Pountney has worked at the world’s leading venues, including those in Chicago, Houston, San Francisco, New York, Paris, Berlin, Rome, Amsterdam, Vienna, Zurich, and Munich. In 1992, he staged the world premiere of Philip Glass’s The Voyage at the Metropolitan Opera. The long and diverse list of Pountney-staged productions includes such Russian operas as The Gambler (1983), Lady Macbeth of Mtsensk (1987), and Christmas Eve (1988) at English National Opera; The Nose at De Nederlandse Opera (1996); The Golden Cockerel at the Bregenz Festival (2000); Paradise Moscow based on Shostakovich’s operetta Moscow, Cheryomushki (Opera North, 2001); and Khovanshchina at the Welsh National Opera (2007).

In 2003, Pountney staged Pyotr Tchaikovsky’s The Enchantress (co-production of the Mariinsky Theatre and the Teatro Nacional de São Carlos) in Lisbon. In the 2007/2008 season, he debuted at the Bolshoi Theatre in Moscow with his production of Carmen.

The director has also written the librettos of three operas by English composer Sir Peter Maxwell Davies (The Doctor of Myddfai, 1995; Mr Emmet Takes a Walk, 1999; and Kommilitonen! , 2011) and translated opera librettos into English from various languages, including Czech, German, Italian, and Russian.

David Pountney is a CBE (Commander of the Order of the British Empire) and a Chevalier of the Ordre des Arts et des Lettres (a French civilian honour).
Information for November 2018