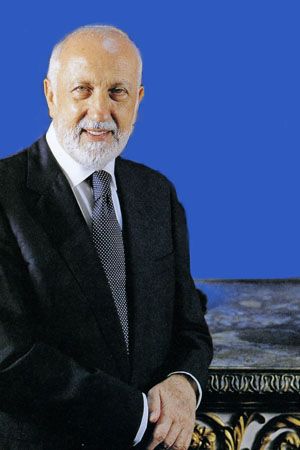 Stage Director & Set and Costume Designer
Pier Luigi Pizzi first worked as a set designer in 1951. For twenty years he worked at the renowned Compagnia dei Giovani together with Giorgio De Lullo, Romolo Valli and  Rossella Falk, creating almost all of the sets and  costumes for that company’s productions. In the 1960s the Compagnia dei Giovani visited Moscow and  Leningrad on tour.
1977 saw Pizzi’s debut as an opera director with Mozart’s Don Giovanni at the Teatro Regio in Turin (with Ruggero Raimondi in the lead role).
For over sixty years the stage director has worked with major theatres and  at the most prominent festivals. He has won numerous prestigious international awards, among them the Ordre de la Légion d’honneur, the Ordre des Arts et des Lettres (Officier), the Order of the Holy Cross of the Italian Republic (Honorary Cavalier), the Order for Services to Culture of the Principality of Monaco (Commander, 2006), the Order of St Agatha of the Republic of San Marino, Milan’s order of Golden Ambrosia and  Florence’s Order of the Golden Florin. Pizzi also holds the title of Honorary Doctor of the University of Macerata and  is a member of the Verona and  Parma Academies of Fine Arts and  a recipient of the Life for Music award.
In 1987 Pier Luigi Pizzi’s production of the opera Aida opened the first season at the Wortham Center in Houston, while in 1990 his production of Les Troyens opened the season at the Opéra Bastille in Paris.
Since 1982 Pizzi has been involved in the Rossini Festival in Pesaro on an annual basis. It is thanks to his efforts that many of Rossini’s operas have been revived, among them Tancredi, Guillaume Tell and  La pietra del paragone.
In 2000 the stage director won a seventh Abbiati Prize in the category “Best Opera Production of the Year” for Britten’s Death in Venice (Teatro Carlo Felice, Genoa).
At the opening of the Teatro delle Muse in Ancona there was a performance of Pizzi’s production of Idomeneo, and  he later returned to that theatre to stage Henze’s Elegie für junge Liebende and  Hindemith’s Neues vom Tage.
At many theatres throughout the world Pizzi has staged his production of Handel’s Rinaldo: this production has been seen in Reggio Emilia, Paris, Madrid, Lisbon, Geneva, Venice (La Fenice) and  Milan (La Scala). The stage director has also produced La traviata, A Midsummer Night’s Dream and  three operas by Monteverdi at the Teatro Real in Madrid in addition to offering his own new and  revolutionary reading of Verdi’s Un ballo in maschera at the Piacenza Expo exhibition centre. The latter production was subsequently performed at the Teatro Massimo in Palermo and  at the Sferisterio arena in Macerata.
Pizzi founded an opera festival in Macerata, of which he served as Artistic Director from 2006 to 2011. During his tenure the festival’s repertoire became enriched with many baroque and  contemporary operas.
The Opéra de Monte-Carlo performs Pizzi’s production of Il viaggio a Reims, staged to mark the occasion of Prince Albert II’s accession to the throne. In December 2004 the Teatro alla Scala opened its season following reconstruction work with Pizzi’s production of Salieri’s opera Europa riconosciuta. This opera had never been staged between its premiere right up to 2004. Pizzi has made a tremendous contribution to the revitalisation of La Scala’s theatre museum. Pizzi dedicates much of his time and  efforts to organising various exhibitions, among them Versailles and  Antiquity in Paris.
In 2004 Pizzi staged the opera Les Contes d’Hoffmann at the Sferisterio arena and  the operas Les mamelles de Tirésias by Poulenc and  Le Bel indifférent by Tutino at the Teatro Lauro Rossi in Macerata.
Productions by the stage director in recent years include Donizetti’s Maria Stuarda, Lehár’s Die Lustige Witwe and  Marschner’s Der Vampyr at the Teatro Comunale di Bologna and  the Teatro Massimo in Palermo, Riz Ortolani’s Il principe della gioventù at La Fenice in Venice and  the Teatro Arcimboldi in Milan, Reynaldo Hahn’s Mozart (directed by Sacha Guitry) at the Festival dei Due Mondi in Spoleto, Britten’s The Turn of the Screw at La Fenice in Venice, Adès’ Powder Her Face in Bologna and  Verdi’s Un giorno di regno, I vespri siciliani and  La battaglia di Legnano at the Verdi Festival in Parma. Recently Pizzi completed work on the Mozart and  Da Ponte trilogy.
Since 1968 the stage director has frequently worked with the Opera di Roma. His first production there was Verdi’s opera I due Foscari. He later returned to stage the operas Macbeth, Alceste, Faust, Mosè in Egitto, La Vie parisienne, Diabły z Loudun, La battaglia di Legnano, Die Zauberflöte and  Attila. One of his most recent productions at the Opera di Roma was Ponchielli’s La Gioconda. Pizzi rarely works in dramatic theatre, although his 2007 production of Una delle ultime sere di Carnevale after Goldoni’s play was well received by the critics as one of the best of the year in addition to garnering several awards. This production has also been performed in Moscow. Pizzi recently made his debut at the Bolshoi Theatre in Moscow with Bellini’s opera La sonnambula and  staged La Gioconda at the Opéra Bastille in Paris.
In October Pizzi took part in the opening of the Astana Opera (Kazakhstan). There he presented a production of the opera Attila (conducted by Valery Gergiev).