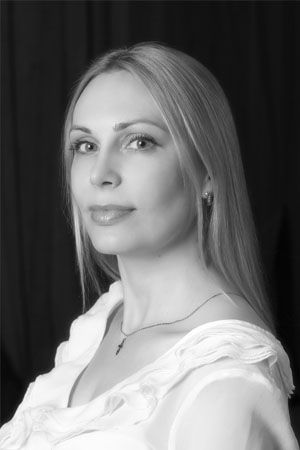 Graduated from the St Petersburg University of Culture and the Arts (having specialised as a classical chorus conductor) and the St Petersburg State Rimsky-Korsakov Conservatoire (having specialised as a stage director of musical theatre). She is a member of the long-established directing school of Roman Irinarkhovich Tikhomirov.
Has taken part in Russian and international festivals and projects in St Petersburg, Vienna, Riga, Imatra, Astrakhan, Vladikavkaz, Ulan-Ude, and China and regional festivals in Perm and Yokshar-Ole.
Recipient of a diploma from the Culture Committee of the State Duma of the Russian Federation for her involvement in the festival The Best Projects in Russia.
She has staged over twenty-five productions in cities throughout Russia, among them Christmas Eve (St Petersburg (Mariinsky Theatre) and Voronezh), Tosca (St Petersburg and Astrakhan), Madama Butterfly (Astrakhan), Don Pasquale (Astrakhan and Ulan-Ude), Eugene Onegin (Kazakhstan), Rigoletto (Voronezh), The Marriage (St Petersburg), Così fan tutte (St Petersburg) and Die Fledermaus (Vladikavkaz).
Writes libretti and scenarios for plays and projects and runs concerts on a government level.