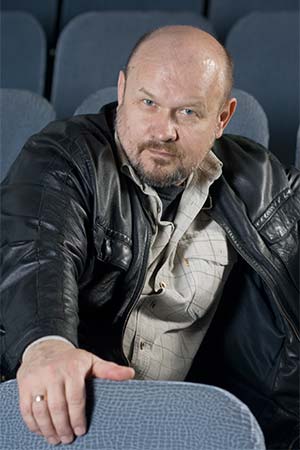 Born in Tashkent in 1953. Graduated from the faculty of acting (1975) and the faculty of directing (1983) of the Tashkent Ostrovsky Theatre and Art Institute (now the State Institute of the Arts of Uzbekistan). From 1975 to 1990 he was an actor and director of the Tashkent Academic Russian Drama Theatre, and from 1990 to 2003 he was Principal Director of the Yaroslavl Youth Theatre.

From 1976–1990 he taught at the Tashkent Theatre and Art Institute, and since 1992 he has taught at the Yaroslavl Theatre Institute (Professor since 2004). His actor students include People's Artists of Russia, Uzbekistan and Kyrgyzstan as well as theatre and film directors.

Kuzin has worked on around one hundred productions – stagings of Russian classics (Pushkin's Boris Godunov, Gogol's The Government Inspector, Alexei Tolstoy's Tsar Fyodor Ioannovich and plays by Ostrovsky, Chekhov and Gorki), works by 20th century Russian authors (Marshak, Chukovsky, Schwartz, Okudzhava, Shushkin, Radzinsky, Volodin and Gorin), as well as contemporary playwrights – Kolyada and Sadur. Productions in the European repertoire include Shakespeare's Romeo and Juliet, Molière's Tartuffe and Le Médecin malgré lui, Rostand's Cyrano de Bergerac, Camus' Caligula (first production in the USSR), Fo's Archangels Don't Play Pinball, McDonagh's The Lonesome West, Goldman's The Lion in Winter, Confortès' Le Marathon and Gibson's To Be or not to Be among others. In 2010 at the Russian State Academic Volkov Drama Theatre (Yaroslavl) there came a production by Kuzin of Emmerich Kálmán's operetta Silva.
In March 2017 the Concert Hall of the Mariinsky Theatre hosted a production of Rodion Shchedrin's opera Not Love Alone.

The director's productions have been staged at theatres in Russia, China and South Korea and have been presented as part of programmes of international theatre festivals.
Information for June 2018