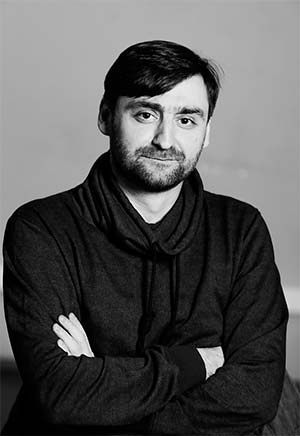 Graduated from the stage directing faculty of GITIS (workshop of Sergey Artsibashev and Yuri Ioffe). His degree production Tras was included in the programme Russian Case for Russia's Golden Mask theatre prize.

Began his career as an actor at the School of Modern Drama and performed at the Mayakovsky Theatre.

Has directed the Russian Theatre of Estonia in Tallinn and been the Principal Stage Director of the New Stage of the Alexandrinsky Theatre. Initiated the formation of and directed the Workshop on Begovaya laboratory of youth stage directing at the Centre of Drama and Stage Directing, as well as the laboratory Experiment 123 at the Prokopyevsk Drama Theatre.

In 2012 he received a grant from the President of the Russian Federation to support creative projects of national significance.

His work as a director has seen him receive the Golden Mask award for Life Is Grand with Teatr.doc and the Centre of Drama and Stage Directing (Special Jury Prize), Exhibits at the Prokopyevsk Drama Theatre (Critics' Prize) and August. County Oseydzh at the Novosibirsk Globus Theatre (for best work by a director).

At the Mariinsky Theatre he has staged Richard Strauss’s opera Salome (2017).
Information for June 2019