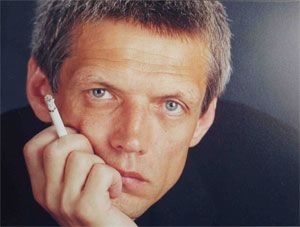 Graduated from the Leningrad Institute of Theatre, Music and Cinematography (LGITMC) in 1977 (class of R. Agamirzian) and from the Russian Academy of Theatre (RATI) in 1992 (A. Vasiliev´s studio). Before 1979 he was an actor with the St Petersburg Komissarzhevskaya Drama Theatre, and from 1981 to 1988 with the Cinema Actors´ Studio at the Lenfilm studios. Has acted in thirty films including The Life of Klim Samgin, The Battalions Are Asking for Fire, Courage, Start Liquidation, Jack Vosmerkin – the American, It and The Romanovs – A Crowned Family. Has staged productions of Escorial (Guild of Cinema Actors), La Funf in der Luft (Youth Theatre on Fontanka), The Three Sisters, The Harp of Welcome, An Urban Romance, Faith, Hope and Charity, Don´t Part with Your Loved Ones (On Liteiny drama theatre), Crime and Punishment (Academy of Theatre, Zurich), The Tale of Tsar Peter and His Murdered Son Alexei, The Schoolgirl, The Marriage (Alexandrinsky Theatre), Eyes of the Day (Russian Drama Theatre, Riga), Jourdain the Half-Wit (Mikkeli, Finland), The Queen of Spades, The Snow Maiden (Mariinsky Theatre), Fröken Julie (Baltic House), Uncle Vanya (Olsztyn Drama Theatre, Poland) and The Passion According to St John (The Passion 2000 international project).
From 2000–2002 was principal director of the Globus Novosibirsk Youth Academic Theatre.
Since 2003, he has been principal director of the Russian State Academic Pushkin Theatre (Alexandrinsky Theatre).