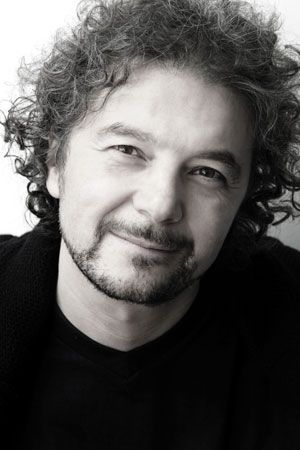 Daniele Finzi Pasca was born in Lugano in 1964 in a family of photographers. He spent his childhood in the family photo laboratory, used by his father, grandfather and great-grandfather before him. Daniele was introduced to the circus world through gymnastics, and he set foot onstage for the first time under the guidance of a clown named Fery. In 1983 Daniele left for India where he worked for a volunteer programme helping the terminally ill. Upon his return to Switzerland, together with his brother Marco and Maria Bonzanigo he founded the Teatro Sunil, its productions combining acting, buffonade and dance. The founders call this theatre technique “theatre of the caress.”

Finzi Pasca was sentenced to a brief term of imprisonment for acting as a conscientious objector. While in jail he put the final touch to Icaro, a monologue conceived for a single spectator. Performed by Pasca himself over seven hundred times in six languages over the past twenty years, Icaro has delighted audiences throughout the world. In this early work one can already observe the company’s emergent style and aesthetics.

He has created and directed twenty shows for the Teatro Sunil that have been performed in twenty countries. All of his productions depict a profound sense of humanity and playfulness. They include Rituale, Viaggio al confine, Dialoghi col sonno, Percossi obbligati, Giacobbe, 1337, Aitestas and Visitatio (the latter co-produced with Montreal’s Carbone 14 theatre). In 2003 he wrote and directed Te amo (co-production with Poramor Producciones and the Teatro Sunil).

For the Cirque Éloize Daniele Finzi Pasca has created Nomade – At Night, the Sky is Endless (2002) and Rain – Comme une pluie dans tes yeux (2003). The latter show brought him a New York Drama Desk Award in the category “Best Director”.

In 2005 he wrote and directed the Cirque du Soleil’s show Corteo. To date it has been seen by over three million spectators throughout the world.

Pasca also directed the closing ceremony of the Turin XX Winter Olympic Games (2006), for which he received the 2006 Swiss Award in the Show Business category.

In 2007 he wrote Nebbia, co-produced by the Cirque Éloize and the Teatro Sunil.

Casagrande has published a short-story anthology entitled Come Acqua allo specchio as well as the script of Viaggio al confine.

In 2009 he co-founded the  Inlevitas production company with Julie Hamelin, which creates and develops artistic projects including opera, acrobatic theatre and cinema. Invelitas’ first project was the opera L’Amour de loin, staged in July 2009 for the English National Opera, also staged in Belgium in 2010 and Toronto in 2012. The company also participated in the publication of Facundo Ponce de León’s book Daniele Finzi Pasca: Theatre of the Caress, written by in 2009.

The Moscow International Chekhov Theatre Festival commissioned him to stage Donka – a Letter to Chekhov to his own script. The premiere took place on 29 January 2010, at the Mossoviet Theatre in Moscow.

In June 2011, Daniele directed Giuseppe Verdi’s Aida, which was conducted by maestro Valery Gergiev at the Concert Hall of the Mariinsky Theatre in St Petersburg. In July, this time in Naples, he directed Ruggero Leoncavallo’s I Pagliacci, which was conducted by maestro Donato Renzetti at the Teatro San Carlo. In 2011, along with Maria Bonzanigo, Hugo Gargiulo, Julie Hamelin and Antonio Vergamini he founded the Compagnia Finzi Pasca where the  stories of the Teatro Sunil and Inlevitas came together. Daniele is currently working on his first film script, Piazza San Michele, which is being produced by Julie Hamelin, and other projects are underway, namely a new acrobatic theatre creation entitled La Verità which will be launched at the beginning of 2013. Daniele Finzi Pasca has been awarded the Hans-Reinhart-Ring 2012, the  most prestigious Swiss theatre prize.
Information for June 2012