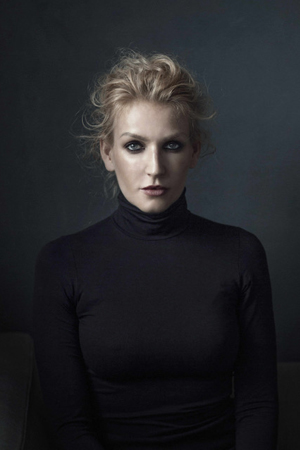 Sláva Daubnerová earned her graduate degree in Cultural Studies on the Comenius University in Bratislava (in 2004) and a postgraduate degree in Theatre Studies on the Academy of Performing Arts in Bratislava (in 2012, doctoral thesis: Performance and Performative Tendencies in Contemporary Theatre, supervised by Prof. Jana Wild, PhD). She has taken part in international artistic residencies (The Grotowski Institute in Wrocław, Le Tas de Sable – Ches Panses Vertes in Amiens) and in 2011 she received the International Forum scholarship of Berliner Festspiele.

In the Slovak and Czech theatre context, director, author, performer and actress Sláva Daubnerová is known mostly for her dramatic compositions that oscillate between contemporary modern theatre and performance. The majority of her theatre art transcends the dramatic genre because of the way she uses new media and physicality, as well as she reconstructs, or deconstructs, what are mostly non-dramatic texts. In her solo works she is the author of the text, visual concept as well as the stage and costume design.

As an established artist, she is invited to work on projects in bricks-and-mortar theatres in which she has successfully directed both opera (National Theatre in Prague: Lolita by Rodion Shchedrin, The Excursions of Mr Brouček by Leoš Janáček, Orango and Antiformalist Rayok by Dmitry Shostakovich, Roméo et Juliette by Charles Gounod; State Theatre Košice: 66 Seasons by Marek Piaček) and drama (Badisches Staatstheater Karlsruhe: Am Königsweg by Elfriede Jelinek, Slovak National Theatre: Singing House, Honour Thy Father and Thy Mother by Sláva Daubnerová), HaTheatre in Brno: Twilight of Males by Sláva Daubnerová.
Information for January 2020