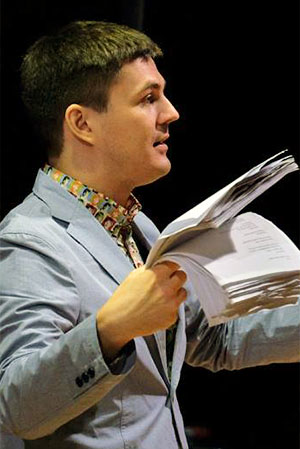 In 2010 Gleb Cherepanov graduated from the faculty of directing of the Boris Shchukin Theatre Institute (workshop of Valery Fokin). In 2014 he won the Oleg Tabakov Prize for his successful directing debut at the Moscow Chekhov Art Theatre. From 2014–2015 he was a stage director at the Moscow Theatre Studio led by Oleg Tabakov, and in 2016 he was a stage director at the Central Academic Theatre of the Russian Army. In 2016 he won 1st prize at a competition for young opera directors at the Mariinsky Theatre and joined the organisational committee of the Russian Defence Ministry's drama competition War and Peace.

In 2017 he held a master-class in directing and the craft of acting at the Atelier theatre in Stuttgart, was a jury member of the Badenweiler International Drama Competition (Germany) and appeared at the round table The Theatre Company as a Platform for Experimentation as part of an education programme run by the company Team +1 at Irina Apeksimova's festival A Theatre March.

Has staged productions of The Miraculous Journey of Edward Tulane (2013), Double Bass (2014) and Louisiana (2014) at the Moscow Chekhov Art Theatre. In 2016, Double Bass opened the Festival of Theatres of Small Towns of the State Theatre of the Nations held in Volsk, which in 2017 was officially recognised as "the greatest touring production of the Moscow Chekhov Art Theatre in the entire period of the theatre's recent history".

Other productions include Jeppe på bjerget (2014), Animal Planet (2014) at the Moscow Theatre Studio directed by Oleg Tabakov, The Dragon (2015) at the Taganka Theatre, The Dissident (2016) and Star Theatre (2017) at the Central Academic Theatre of the Russian Opera and The Beggar's Opera at the Russian State Fyodor Volkov Drama Theatre in Yaroslavl. In 2017 at the VII Regional Festival of Professional Theatres, The Beggar's Opera won in two categories ("Best production" and "Best female role"). He also staged a production at the Volkov Theatre at the annual exhibition of set and costume designers Results of the Season at the Bakhrushin Museum.

At the Mariinsky Theatre, Gleb Cherepanov has appeared as a stage director and set designer in productions of Der Schauspieldirektor, Diary of a Madman and L'Histoire du soldat (2017).

In 2016 he directed the full-length film 23.59 based on his own script, written together with Denis Kataev. The film was screened as part of the international Marché du film's programme at the Cannes Film Festival, the Voices international festival of new European cinema (Vologda) and was included in the Movement National Film Festival of Debuts (Omsk).

Since 2017 he has taught at the REFORMAlab School of Acting Mastery.