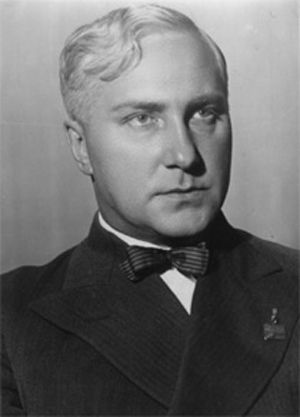 Leonid Vasilievich Baratov was born in Moscow in 1895. He trained at the law faculty of the Moscow State University.
From 1918 he was an actor in Yevgeny Vakhtangov´s studio and from 1920-1922 at the 2nd Studio of the Moscow Arts Theatre.
From 1922 he was an actor and director at the Music Studio of the Moscow Arts Theatre, later renamed the Nemirovich-Danchenko Musical Theatre.
From 1931-1936 and 1944-1956 he was a director (from 1944-1949 principal director) at the Bolshoi, where he staged operas including Mazepa, The Queen of Spades, Ivan Susanin, Boris Godunov, Khovanshchina and Nikita Vershinin.
From 1936-1938 he was a director with the Sverdlovsk Theatre of Opera and Ballet.
From 1938-1943 he was a director with the Leningrad Theatre of Opera and Ballet, where he staged the operas Into the Strom, The Enchantress and Yemelyan Pugachev.
From 1950-1959 he was principal director of the Moscow Nemirovich-Danchenko Musical Theatre, where he staged the operas The Taras Family and War and Peace.
From 1926 he engaged in teaching at various academic institutions (among them the MKhAT studio school and the All-Russian State Institute of Cinema).
Professor at the State Institute of Theatre Arts from 1947. His students include Sokovnin and Mikhailov.
Leonid Baratov died in Moscow in 1964.