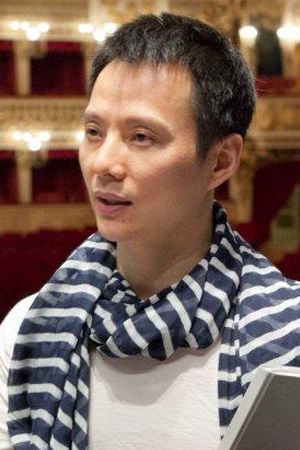 Choreographer, Director, Dancer, Painter and Designer
Choreographer, director, dancer, painter and designer, Shen Wei is internationally renowned for his cross-cultural, boldly visual movement-based spectacles. He is perhaps best known as the lead choreographer for the Opening Ceremonies of the 2008 Beijing Olympics, which won acclaim worldwide. The Washington Times has called Shen Wei “One of the great artists of our time” and The New York Times proclaimed, “If there is something to write home about in the dance world, it is the startlingly imaginative work of the Chinese-born choreographer Shen Wei.”

Born in China’s Hunan province, Shen Wei was trained from youth in the rigorous practice of Chinese opera performance and was a performer with the Hunan State Xian Opera Company from 1984 to 1989. In 1991, at the age of 23, he became a founding member of the Guangdong Modern Dance Company, the first such company in China. In 1995, upon receipt of a fellowship, he moved to NYC to study with the Nikolais/Louis Dance Lab and was invited to present his work at the American Dance Festival. In July 2000, he founded Shen Wei Dance Arts (SWDA), and his Company quickly entered the international touring circuit. Since forming his Company, he has received numerous commissions to support his creative works for Shen Wei Dance Arts including: multiple commissions from the American Dance Festival; 2 from Het Muziektheater Amsterdam; 2 from the Lincoln Center Festival; 2 from the Kennedy Center for the Performing Arts; as well as from The Metropolitan Museum of Art, the Park Avenue Armory, Hong Kong’s New Vision Arts Festival, and the Edinburgh International Festival.

Shen Wei has also created dances for Les Grands Ballets Canadiens de Montrйal and Les Ballets de Monte-Carlo and choreographed the Rome Opera’s production of Rossini’s Moise et Pharaon, conducted by Ricardo Muti. Most recently, he was commissioned to create a new work for the Dutch National Ballet in Amsterdam, which was received with critical acclaim.

Recently, his work as a visual artist and choreographer have entered into a new dialogue in a series of performative installations and site-specific works, which have been presented at a number of museums and galleries including The Metropolitan Museum of Art, the North Carolina Museum of Art, Collezione Maramotti in Italy, Mana Contemporary and the Forum at the Yerba Buena Center for the Arts.