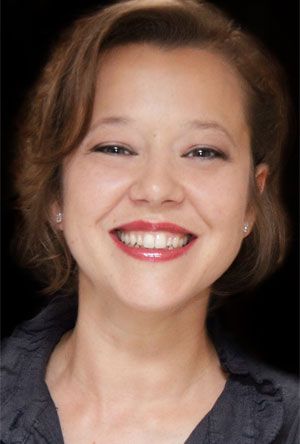 Entrepreneur, Creator and Producer
Julie Hamelin was born in Montreal (Québec, Canada) in 1972
At the age of 21, Julie co-founds Cirque Éloize, a Canadian company based in Montréal, leader in the new circus genre. As head of International Development, she concludes key agreements and creates an important distribution network which will allow the company’s creations to be presented on the world’s most renowned stages over the years. Up until 2010, over 3,000 performances of their productions were presented in more than 300 cities in 35 countries.
In 2001, she meets Daniele Finzi Pasca and a long and intense artistic collaboration begins. For Cirque Éloize, she produces and participates in the creation of the Trilogy of the Sky created by Daniele: Nomade (Cirque Éloize), Rain (Cirque Éloize) and Nebbia (Cirque Éloize and Teatro Sunil).
In 2003, she launches the company Théâtre T. Et Cie where she produces Typo, by Jamie Adkins, while also managing its international distribution.
In the summer of 2005, Daniele Finzi Pasca invites her to join the creation team behind the closing ceremony of the Torino XXth Winter Olympics Games. As first assistant-director, she contributes to the writing process and participates in creating some of the choreographies. She also acts as the link between the creation team and the producers.
In 2009, Julie and Daniele create the company called Inlevitas in order to give life to new artistic projects including opera, acrobatic theatre and films. In 2009, for their first project, Julie is Daniele’s Creative Associate as he directs Kaija Saariaho’s opera L’Amour de Loin, produced by London’s English National Opera, the Vlaamse Opera of Antwerp and Toronto’s Canadian Opera Company.
In 2009-2010, Inlevitas co-produces Donka, a show created by Daniele for the 150th anniversary of Anton Chekhov’s birth, for which Julie is Creative Associate.
In June 2011, Julie also acts as such alongside Daniele but this time in St Petersburg as he directs Giuseppe Verdi’s Aida, conducted by Maestro Valery Gergiev, produced by the Mariinsky Theatre.
In July 2011, again as Creative Associate, this time in Naples, Italy for the direction of Ruggero Leoncavallo’s Pagliacci, conducted by Maestro Donato Renzetti, produced by Teatro San Carlo.
In 2011, she founds Company Finzi Pasca along with Antonio Vergamini, Daniele Finzi Pasca, Hugo Gargiulo and Maria Bonzanigo (in alphabetical order), company where the stories of Teatro Sunil and Inlevitas meet.
Julie is actually working on developing the first film project written by Daniele and a new acrobatic theatre creation called La Verità that will be launched at the beginning of 2013.
She also published the book Daniele Finzi Pasca: Theatre of the Caress, written by Facundo Ponce de León.