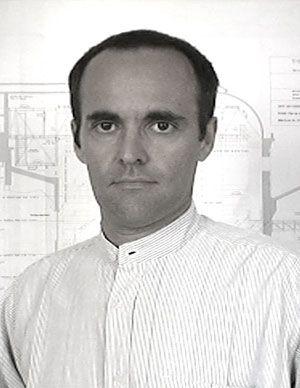 Eric Duranteau studied at the State School of Arts in France and in the USA. His professional interests include video projection techniques. Since 1990 he has been involved in numerous projects as a video designer, among them Révélation de Notre-Dame in Poitiers (projections on the cathedral), Trophée Lalique (projections on ice), Son et Lumière at Versailles (projections on water) and the World Fair in Lisbon (projections on spheres).

He also created the set designs and images for Entr'aperçuby Bartabas (Théâtre du Chatelet) and Robert Carsen’s Rusalka (Opéra Bastille) in addition to collaborating with the IRCAM (Centre Beaubourg, Paris) to create ON IRON with the composer Philippe Manoury.

In 2000 he began a research programme with dancers on modified environments and experiences with weightlessness in parabolic flight in Star City (Moscow) and at the Centre National d’Études Spatiales (Bordeaux), one result of which was the creation of the video installation File/Air, presented at La Maison Européenne de la Photographie and at the Monaco Dance Forum.

Eric Duranteau is artist laureate of the 2006 Villa Kujoyama in Kyoto (Japan) and teaches video stage design in Paris.