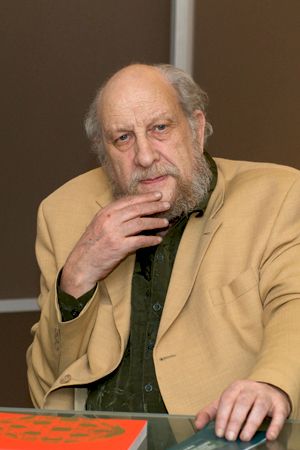 Yuri Dimitrin was born in Leningrad in 1934. He first received higher technical education but soon after changed profession, becoming a journalist, man of letters and dramatist. He worked in a drama theatre in Siberia and then on Leningrad TV. In 1966 he turned to the genre of opera libretti. Dimitrin has created more than seventy works for musical theatre including original libretti, translations, scenarios and new versions of existing libretti. Over fifty operas, operettas and musicals using his own and translated libretti have been staged in theatres and printed by music publishers, recordings have been produced and broadcast as musical television films. Alexander Smelkov’s opera The Brothers Karamazov with a libretto by Dimitrin has been in the Mariinsky Theatre’s repertoire since 2008.
In 1997 Yuri Dimitrin published a book We Cannot Guess in Advance about the original text of Shostakovich’s opera Lady Macbeth of Mtsensk and subsequent versions. He has also written a memoir study about Shostakovich, reviews of music productions and articles about the problems of libretti and musical theatre. Yuri Dimitrin teaches a course of lectures entitled “The Dramatic Theory of the Opera Libretto” at the St Petersburg Academy of Theatre Art. In 2000 Yuri Dimitrin founded the website The Libretto in Dreams and in Reality about the genre of the libretto and the profession of the librettist (www.ceo.spb.ru/libretto).
Yuri Dimitrin has been a recipient of the literary award Northern Palmira in the category “Drama” (1999).