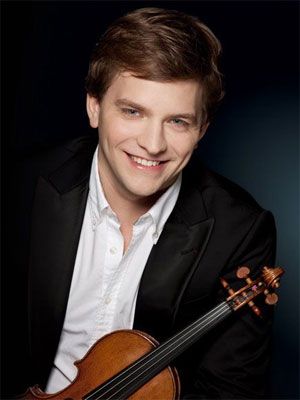 “It was playing full of effective contrasts, steel alternating with velvet. By the last movement he was at full power, his sound sumptuous… It was dramatic and exhilarating, and bound together by a firm sense of direction.”
The Strad
Violin

Valeriy Sokolov is one of the most sought-after young violinists. He has won acclaim thanks to his impeccable technique, emotionality and artistic maturity in his performances of extremely demanding violin scores.
The eighteen-year-old Valeriy Sokolov was the focus of the film The Violin in the Soul, directed by Bruno Monsaingeon – the director of various documentaries about Sviatoslav Richter, Dietrich Fischer-Dieskau, Glenn Gould, David Oistrakh and Yehudi Menuhin. This film received numerous highly positive reviews and has been broadcast on ARTE TV.
Valeriy Sokolov was born in 1986 in Kharkov (Ukraine). He studied at the Kharkov Special School of Music. In 1999, thanks to a successful performance at the Pablo Sarasate International Violin Competition in Pamplona, he won a Vladimir Spivakov Foundation grant. This grant allowed him to continue his education at the Yehudi Menuhin School in London (class of Natalia Boyarskaya). After graduating from the school he was admitted to the Royal College of Music in London (class of Felix Andrievsky). In 2011 he completed a postgraduate study at the Hochschule für Musik und Theater in Frankfurt and a second postgraduate course at the Kronberg Music Academy (class of Ana Chumachenco). He is currently a postgraduate student at the Vienna Konservatorium (class of Boris Kuschnir).
He has taken part in master-classes given by Zakhar Bron, Dora Schwarzberg, Ruggiero Ricci, Mstislav Rostropovich, Gidon Kremer and András Schiff.
In 2005 he won the International Enescu Violin Competition in Bucharest, taking the Grand-Prix and two special prizes – from the Enescu Foundation and “For the Best Performance of Enescu’s Violin and Piano Sonata No 3”.
He has appeared with the Orchestre National de France, London’s Philharmonia Orchestra, the Stockholm Philharmonic Orchestra, the Rotterdam Symphony Orchestra, the Cleveland Orchestra, the Tokyo Symphony Orchestra, the Tonhalle Orchestra, the Mozarteum Orchestra and the Nord-West Deutsche Rundfunk Sinfonieorchester (Hanover) among others. The violinist has long held collaborative links with the Chamber Orchestra of Europe.
Valeriy Sokolov regularly performs at festivals in Verbier (Switzerland) and Aspen (USA, the Festival de Radio France in Montpellier France) and the Yehudi Menuhin Festival (Switzerland) to name but a few.
The musician has performed recitals at the Théâtre du Châtelet and the Théâtre des Champs Élysées (Paris), Wigmore Hall (London), the Teatro Olimpico (Rome), the Lincoln Center (New York), the Concert Hall of the Mariinsky Theatre, the Festspielhaus in Baden-Baden, and various other venues in Vancouver, Hong Kong, Lyon and Essen.
Currently, Valeriy Sokolov is regularly partnered by the pianist Evgeny Izotov.
In 2007 Valeriy Sokolov signed an exclusive recording contract with EMI-Classics. Together with this company, the violinist has already released three discs. The first to appear was a recording of Enescu’s Violin Sonatas, which Valeriy Sokolov performed together with pianist Svetlana Kosenko (2007). October 2011 saw the release of a disc featuring concerti by Bartók and Tchaikovsky (with the Zurich Philharmonia under David Zinman). In 2012 came the release of Valeriy Sokolov’s third disc – a recording of a concert at the Concert Hall of the Mariinsky Theatre (with Evgeny Izotov performing the piano).
Valeriy Sokolov regularly performs chamber music. He has collaborated with such musicians as Mischa Maisky, Gary Hoffman, Leonid Gorokhov, Gidon Kremer, Vadim Repin, Denis Matsuev, Julian Rachlin, the Karol Szymanowski Quartet, Kathryn Scott, Viktoria Postnikova and Igor Tchetuev.
In February 2008 Valeriy Sokolov performed the American premiere of Boris Tishchenko’s Violin and Piano Concerto at Carnegie Hall.
Valeriy Sokolov conceived and was Artistic Director of the Musical Evenings international chamber music festival which ran in Kharkov in 2010 and 2011.