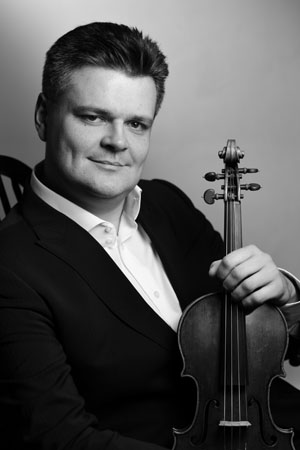 This is what is sounds like when a player moves beyond the technical demands of a work and becomes a vehicle for the essence of the music.
Strings Magazine

Simović shows the astonishing variety of these works… breathtakingly worthwhile.
The Guardian

Roman Simović's brilliant virtuosity has taken him throughout all continents performing on many of world's leading stages including the Great Hall of the Tchaikovsky Conservatoire, the Concert Hall of the Mariinsky Theatre, the Opera House in Tel Aviv, the Victoria Hall in Geneva, the Rudolfinum in Prague, the Barbican in London, the Seoul Arts Center, the Grieg Hall in Bergen and the Rachmaninoff Hall in Moscow.

A sought-after artist, Roman Simović has been invited by and continues to perform at various distinguished festivals such as the Verbier Festival, the Stars of the White Nights in St Petersburg, the Moscow Easter Festival, the Dubrovnik Summer Festival in Croatia, Kotor Art in Montenegro, the BEMUS and NOMUS festivals in Serbia, the Sion-Valais Festival in Switzerland, Norway’s Bergen Festival, the Moscow Winter festival in Russia, the Portogruaro Festival in Italy and the Granada Music Festival in Spain, collaborating with such renowned artists as as Leonidas Kavakos, Evgeny Kissin,Yuja Wang, Gautie Capuson, Antoine Tamestit, Misha Maisky, Schlomo Mintz, Francois Leleux, Itamar Golan, Simon Trpceski, Janine Jansen and Julian Rachlin.

As an educator, he has presented master-classes in the US, UK, South Korea, Serbia, Montenegro, Israel, Italy. In the 2018 season, Roman Simović released 24 Caprices by Paganini (LSO live).

Roman Simović is a leader of the London Symphony Orchestra. He plays a 1709 Antonio Stradivari violin, which was generously given to him on loan from Jonathan Moulds, Bank of America’s President.
Information for October 2018