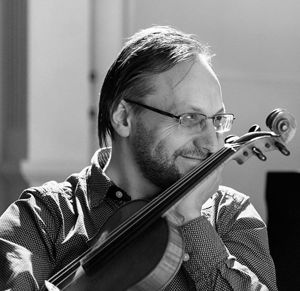 Vladislav Pesin was born in Leningrad in 1973. In 1998, he graduated from the St Petersburg State Rimsky-Korsakov Conservatoire (classes of Anatoly Reznikovsky, Elena Komarova and Elena Shafran), and in 2000 he completed his post-graduate studies at the Conservatoire. In 1996, he trained at the Amsterdam Conservatorium, while in 2001–2002 he studied at the Moscow State Tchaikovsky Conservatoire (class of Sergei Girshenko). Grant-recipient of the Gartow Stiftung (Germany).

Prize-winner at the international competitions Franz Schubert and 20th Century Music in Graz (1997), the Pietro Locatelli Competition in Amsterdam (1997) and the Johannes Brahms Competition in Gdansk (2003) and recipient of special prizes at the Kuhmo Chamber Music Festival (1999 and 2004). In 2012, he won the special prize of the International Darmstadt Music Institute in the “Interpretation” category.

From 1998 to 2000, he was the concertmaster and soloist of the St Petersburg Mozarteum Orchestra. At around this time he produced numerous recordings with the early music ensemble Musica Petropolitana (WDR and Opus111).

From 2009 to 2012, Pesin was the first violinist with the State Glinka Quartet. From 2012 to 2014, he was a guest concertmaster with the Toulouse National Capitol Orchestra.

He is currently a soloist with the Moscow Ensemble of Contemporary Music and member of the Russian Quattro ensemble, which consists of four soloists, two violinists (Vladislav Pesin and Michael Makarov) and two cellists (Kira Kraftzoff and Sergio Drabkin). Regularly appears in concerts in Germany, Italy, France, Spain, the Netherlands, Austria, Finland, Norway, the US, and China.