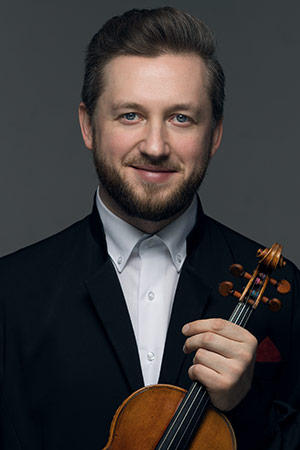 Pavel Milyukov was born in Perm in 1984. At the age of four he started taking music lessons with Tatyana Shevtsova. In 2009 Pavel graduated from the Tchaikovsky Moscow State Conservatory (class of Vladimir Ivanov). In 2012 he obtained a postgraduate degree at the Moscow Conservatory (under the same teacher). Continued his studies at the Universität für Musik und darstellende Kunst Wien (class of Boris Kuschnir). He has twice received a grant from the St Petersburg Music House and Bank Rossiya (2008, 2009).

Gave masterclasses in Russia and Brazil. Toured across Austria, Belgium, Brazil, China, Finland, France, Germany, Greece, Italy, Portugal, South and North Korea, Spain, Sweden and Switzerland. Has made appearances at the Tchaikovsky Concert Hall, the Grand Hall of the Moscow Conservatory and the Concert Hall of the Mariinsky Theatre among other venues.

Since 2007 he has been a participant in programmes of the St Petersburg Music House. Since 2012 he has been a soloist with the Moscow Philharmonic Society.

Assistant Professor at the Violin Division at the Moscow Conservatory (since 2016).

In 2016 he was awarded the Order of Friendship.
Information for June 2022