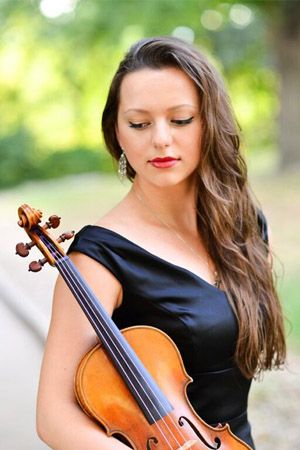 Maria Ioudenitch was born in Balashov (Russia). She began studying the violin at the age of three with Gregory Sandomirsky, Associate Concertmaster Emeritus of the Kansas City Symphony, and has studied with Ben Sayevich at the International Center for Music at Park University in Parkville, Missouri, since the age of seven.

Since then, she has played on numerous occasions, including at the Sun Valley Writers’ Conference, a benefit concert for the Kansas City Free Health Clinic, the Kansas City Music Club, the World Performance Series in Jackson (Mississippi), the Hamakua Music Festival in Hawaii and the Russo-Finnish music and poetry festival Towards Vyborg. She was also invited to perform for the Spivakov International Charitable Foundation in Moscow and has performed multiple times with The Philharmonia of Greater Kansas City. In 2008, she was invited to perform for Van Cliburn at the celebration of the 50th anniversary of his legendary victory at the I Tchaikovsky International Competition in Moscow in 1958. Ioudenitch has participated in various master-classes with such eminent musicians as Midori, Shmuel Ashkenasi, Ana Chumachenco, Zakhar Bron, Pinchas Zukerman, Gil Shaham, Eric Rosenblith and Noah Geller.

In 2011, Maria performed with the Tupelo Symphony and travelled to Salzburg (Austria), where she participated in master-classes and performed during the International Summer Academy at the Mozarteum University. In 2012 Ioudenitch won 1st prize at the Young Artists Competition hosted by the Kansas City Symphony and performed with the Symphony and Maestro Stern at the Kauffman Center. Maria Ioudenitch won 2nd prize at the 2012 Johansen International Competition (JIC) for Young String Players in Washington, DC. As part of her prize, she performed the Mendelssohn Violin Concerto with the Prince George’s Philharmonic. Recent engagements include a performance with the National Orchestra of Uzbekistan, as well as a gala concert with the Mississippi Symphony Orchestra.

Maria Ioudenitch appeared in concert as part of The Top NPR Radio Program at Hodgson Hall at the University of Georgia in Athens, Georgia. This presentation was broadcast on national radio in April 2013. In March 2014 Maria took part in the International Music Academy in the Principality of Liechtenstein and spent a week under the tutelage of Ana Chumachenco.

Maria Ioudenitch actively contributes in fundraiser activities for the International Center for Music at Park University and for the Knudson Foundation.

Maria is now continuing her studies at the Curtis Institute of Music with Shmuel Ashkenasi and Pamela Frank.