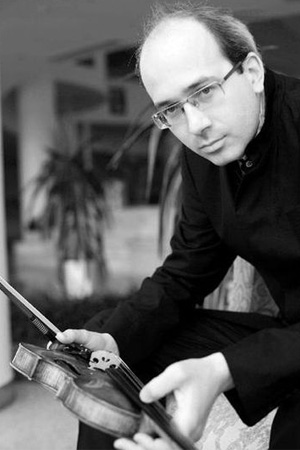 Alexei Lundin was born in 1971 in Moscow to a family of musicians. He began his music studies at the Moscow Gnessin Middle Special School of Music. In 1990, he entered the Moscow State Tchaikovsky Conservatoire (class of Nadezhda Beshkina). In 1993, he became a prize-winner of the Chamber Ensembles Competition in Trapani. In 1996, he won the International Violin Competition in Weimar. In 1995, he continued his post-graduate studies and worked as an assistant (violin soloist) to Marine Jaszwili and as a chamber performer to Alexander Bonduriansky. He honed his music skills as a performer in a string quarter under Rafael Davidyan. In 1998, he became the first violin of the Mozart Quartet, which received the 1st prize at the Shostakovich String Quartet Competition in 2001. Lundin favours modern music and performs works of Vladimir Krivtsov, Roman Ledenev, Edison Denisov, David Krivitsky, Vladimir Tarnopolsky, Giya Kancheli, Vladimir Torchinsky, Karen Khachaturian, Alexander Tchaikovsky, Krzysztof Penderecki, and Yuri Butsko, who dedicated his Violin Concerto No. 4 to Lundin.
Information for November 2018