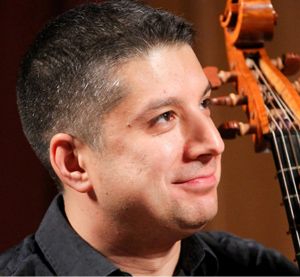 Nazar Kozhukhar is a violinist, conductor, founder and Artistic Director of the ensemble The Pocket Symphony of soloists.

From 1995–2002 he taught at the Moscow Conservatoire, where on his initiative there was founded the faculty of historic and contemporary performance, currently led by Alexei Lyubimov. Since 1996 he has been a soloist with the Moscow State Philharmonic.

Has been a jury member of the All-Russian Competition of Young Composers chaired by Edison Denisov and organised the Edison Denisov Festival of Contemporary Music in Tomsk (2002 and 2003).

Has appeared with Svyatoslav Richter, Alexander Rudin, Tatiana Grindenko, Eliso Virsaladze, Natalia Gutman, Alexei Lyubimov, Tigran Alikhanov and Bob van Anderson. Has recorded on radio and TV and gives master-classes throughout Russia and abroad. Since 1989 he has performed on instruments from the State Collection of Unique Musical Instruments. From 1994–2001 he performed the Antonio Stradivarius “Yusupov” violin (1736).