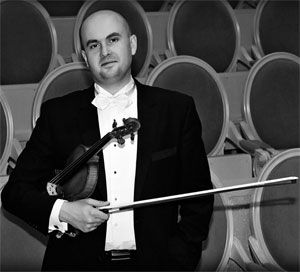 Since 2004 he has been a member of the Mariinsky Theatre Symphony Orchestra. Since 2005 he has been the leader of the first violins.

In 2002 and 2003 he participated in the International Summer Music Festival in Verbier (Switzerland); in 2010 together with the Mariinsky Theatre Quartet he took part in the Mikkeli Festival (Finland). Performs with the Verbier Festival Orchestra (Artistic Director – James Levine). With the Mariinsky Theatre Orchestra he has performed under such conductors as Valery Gergiev, Mariss Jansons and Paavo Järvi.

With the theatre’s orchestra he has toured throughout Russia and abroad.