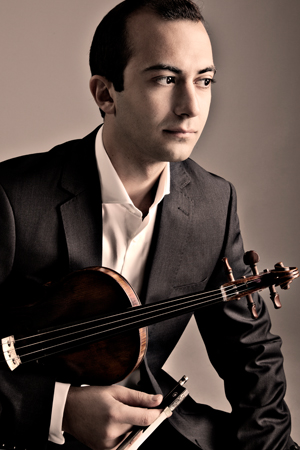 Haik Kazazyan was born in Yerevan in 1982. In 1989 he entered the Yerevan Sayat-Nova School of Music (class of Levon Zoryan). Moved to Moscow in 1996. Studied under Eduard Grach at the Gnessin Moscow Special School of Music (1996–2000) and the Tchaikovsky Moscow State Conservatory (2000–2006), as well as under Ilya Rashkovsky at the Royal College of Music in London (2006–2008).

Appeared at such acclaimed venues as Carnegie Hall in New York, the Berliner Philharmonie, the Victoria Hall in Geneva, the Barbican Hall and Wigmore Hall in London, the Théâtre du Châtelet and the Salle Gaveau in Paris, the Usher Hall in Edinburgh, the Glasgow Royal Concert Hall, the Small and Rachmaninoff Halls of the Moscow Conservatory, the Tchaikovsky Concert Hall, the Moscow International Performing Arts Centre, the State Kremlin Palace and the Grand Hall of the St Petersburg Philharmonia. Took part in the Sion Festival and the Verbier Festival as well as the festivals Stars on Baikal, Crescendo, Arts Square and Musical Kremlin.

In 2010 he released with pianist Andrey Shibko the album Opera Fantasies (Delos), while in 2017 there came an album with violin sonatas by Grieg, recorded with pianist Philipp Kopachevsky. Since 2002 the musician was a soloist with the Moscow Philharmonic Society, and since 2008 he has taught at the Moscow Conservatory.
Information for May 2022