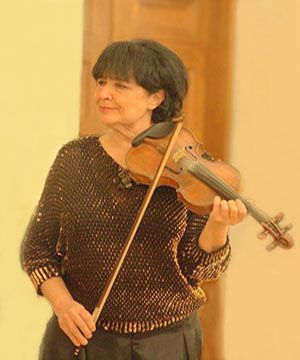 Violinist and Conductor
Internationally renowned Georgian violinist Liana Isakadze has been acclaimed as one of the greatest performers of the century. Her name features in the encyclopaedia 2000 Outstanding Musicians, published in 2002 by the International Biographical Centre of Cambridge.
In 1965 the eighteen-year-old Liana Isakadze was awarded 1st prize and the Grand Prix at the Marguerite Long–Jacques Thibaud International Competition. In 1970 she was a prize-winner at the Tchaikovsky International Competition in Moscow (3rd prize) and took 1st prize and the Special Prize for the best performance of a work by Jean Sibelius at the Sibelius International Competition in Helsinki.
Liana Isakadze began to appear as a conductor in 1981 when she was invited to join the State Chamber Orchestra of Georgia as Artistic Director and Principal Conductor.
Since then the orchestra has won tremendous international acclaim. From 1990–1997 in accordance with an agreement between Audi and Liana Isakadze and with the support of the authorities in Ingolstadt (Germany) the orchestra became based there. This allowed Liana Isakadze to expand the geography of her recitals and offer the orchestra the opportunity at perform at the world’s most prestigious venues. In 1998 the orchestra returned to its native land where it was directed by Liana Isakadze until 2005.
In Ingolstadt Liana Isakadze founded the David Oistrakh Academy of String Instruments. She has also established numerous international festivals, among them Night Serenades (Georgia-Germany), Musicians Joking (Tbilisi-Moscow), the Arts Festival in Borjomi and the Liana Isakadze Festival in Vienna and Lichtenstein.
In 2011 she founded the Virtuosos of Facebook orchestra and the Friends of Facebook international festival. The first concerts of this festival took place in Batumi (Georgia).
Liana Isakadze has been awarded the honorary titles of People’s Artist of Georgia and
People’s Artist of the USSR (at the time, she was the youngest musician ever to receive the title). Moreover, Liana Isakadze has received the State Prize of Georgia on three occasions. In 2003 St Petersburg hosted the Liana Isakadze International Violin Competition.
Numerous documentary films have been made about Liana Isakadze in Georgia, Germany, Finland, Sweden, Japan and Russia.
In 2011 outside the Tbilisi Philharmonic, Liana Isakadze’s Honorary Star was unveiled.