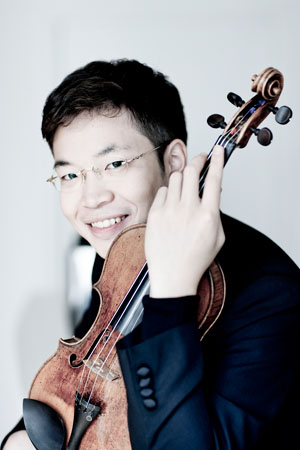 His recent and upcoming engagements include debuts with the Houston, Pacific, Omaha Symphonies, Santa Barbara Chamber Orchestra, Louisiana and Seoul Philharmonics, as well as return engagements with the Detroit, Alabama, Bilbao Symphonies, and National Symphonies of Mexico and Taiwan. He also returns to the Chamber Music Society of Palm Beach, Caramoor Festival’s Rising Stars series, and Camerata Pacifica as their Principal Artist.

In 2015, Paul Huang stepped in for Midori to appear with the Detroit Symphony Orchestra under the baton of Leonard Slatkin performing the Siblieus concerto to critical acclaim. He also appeared with the Alabama Symphony on short notice to perform the Walton concerto. Other season highlights included his Lincoln Center debut performing the Barber Concerto with the Orchestra of St. Luke’s, as well as his sold-out solo recital debut on Lincoln Center's “Great Performers” Series.

His first solo CD, Intimate Inspiration, is a collection of favorite virtuoso and romantic encore pieces released on the CHIMEI label. In association with Camerata Pacifica, he recorded Four Songs of Solitude for solo violin on their album of John Harbison works. The album was released on the Harmonia Mundi label in fall 2014.

Born in Taiwan, Paul Huang began violin lessons at the age of seven. He is a proud recipient of the inaugural Kovner Fellowship at The Juilliard School, where he earned his Bachelor’s and Master’s degrees under Hyo Kang and I-Hao Lee. He plays on the 1742 ex-Wieniawski Guarneri del Gesù on loan through the generous efforts of the Stradivari Society of Chicago.