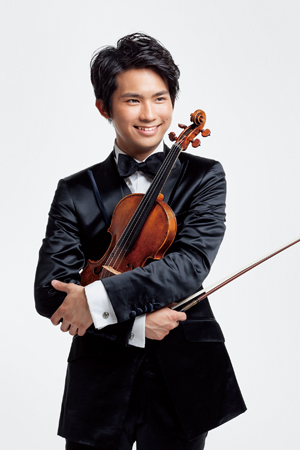 Born in Tokyo in 1993, Fumiaki Miura studied with Tsugio Tokunaga at the Conservatory of his hometown and later moved to Vienna to carry on his studies with Pavel Vernikov and Julian Rachlin. Since he was 16, he is mentored by Pinchas Zukerman who has guided him in his professional career. In 2009 he was awarded First Prize at the prestigious Joseph Joachim Hannover International Violin Competition, where he was not only the youngest winner, but also the most awarded violinist at this competition ever, including both the Critics’ Prize and the Audience’s Award.

This 18-19 season, Miura performs with the Los Angeles Philharmonic and Gustavo Dudamel, the NHK Symphony Orchestra and the Tokyo Metropolitan Symphony Orchestra, among others. In addition to that in May 2019, he toured all over Spain together with the pianist Varvara Nepomnyaschaya.

In recital he has performed at world leading concert halls, including his debuts in Louvre and Théâtre des Champs-Élysées in Paris or Wigmore Hall in London (June 2017). During summer 2018, Miura was on tour in Japan with the pianist Nobuyuki Tsujii, causing great expectation and sold out concerts. His first album presents two Prokofiev violin sonatas with the pianist Itamar Golan for Sony Japan. In autumn 2015, his second album featuring Mendelssohn & Tchaikovsky violin concertos with Deutsches Symphonie-Orchester Berlin and Hannu Lintu was released by Avex-Classics label.

Fumiaki Miura plays a 1704 Stradivarius on a kindly loan of the Munetsugu Foundation.
Information for June 2019