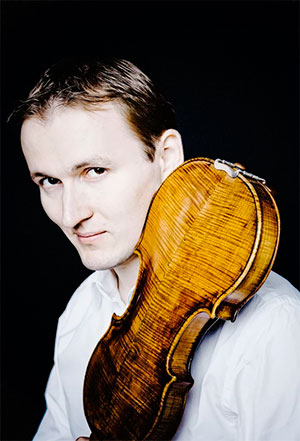 Nikita Boriso-Glebsky is remarkable for his deep contemplation of the music, his impeccable technique and his rare combination of elegance, naturalness and uncompromising nature concerning the strict rules of performance.
La Libre Belgique

In both classical works and opuses by contemporary composers, from the very first bars performed by Boriso-Glebsky you sense the individuality of this young Russian virtuoso, his powerful will, a connection, easily found, with the finest traditions of the Russian violin school.
Rodion Shchedrin

Nikita Boriso-Glebsky was born in 1985 in Volgodonsk (Rostov Region). Graduated from the Tchaikovsky Moscow State Conservatory and undertook a postgraduate study there (class of Eduard Grach and Tatiana Berkul), subsequently continuing his studies under the tutelage of Augustin Dumay at the Queen Elisabeth Music Chapel (Brussels) and under Ana Chumachenco at Kronberg Academy (Germany). Has taken part in international masterclasses at the Keshet Eilon Music Center in Israel, held under the patronage of Shlomo Mintz.

Has been a violinist and leader of the Moscovia Chamber Orchestra, in 2001 becoming a musician of the Moscow Philharmonic Society and a soloist there in 2003.

In 2018 the label Profil (Germany) released an anthology of works by Nikolai Medtnerfor violin and piano performed by Nikita Boriso-Glebsky and Ekaterina Derzhavina. The musician has featured in recordings of five discs of works by Eugène-Auguste Ysaÿe on the label Outhere Music (2018–2019), which received the Diapason d’Or prize.

Performs a violin crafted by Matteo Goffrillerin the 1720s.
Information for July 2021