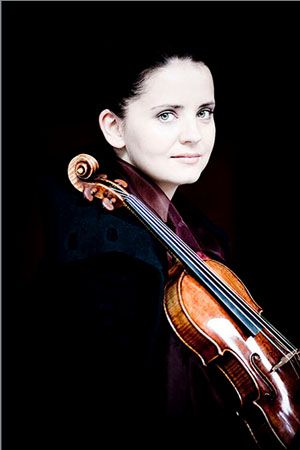 “Baiba Skride’s playing here, and inthe Nielsen Concerto, is characterised by a tone that is inherently and unfailingly beautiful. She gets tothe core of every note without extraneous surface noise, and her vibrato is so integrated withthe tonal colouring that you hardly notice it.”
The Strad

In February 2016, Baiba Skride made her debut withthe New York Philharmonic with Christoph Eschenbach. The concerts were a huge success with Vivien Schweitzer inthe New York Times writing, “Ms Skride brought a wide tonal palette to her insightful and passionate interpretation, her tone meaty and bold to open, then sweet, gossamer and brash.” This season Baiba Skride will appear with Chicago Symphony, Cleveland Symphony, as well as Boston Symphony forthe American premiere of Sofia Gubaidulina’s Triple Concerto for violin, cello, and bayan.