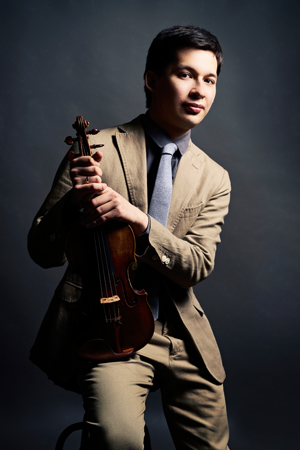 Aylen Pritchin is one of the most vivid and versatile violinists of his generation. He was born in Leningrad in 1987 and began to study the violin at the age of six. He graduated from the Secondary Special Music School of the Rimsky-Korsakov St Petersburg State Conservatory (class of Elena Zaitseva) and the Moscow State Tchaikovsky Conservatory (class of Eduard Grach).

Has toured to Bulgaria, Germany, Austria, Switzerland, France, Italy, the Netherlands, Poland, Israel, Japan and Vietnam. Has given recitals at prestigious concert venues including the Great Hall of the Moscow State Tchaikovsky Conservatory, the Tchaikovsky Concert Hall, the Konzerthaus in Vienna, the Concertgebouw in Amsterdam, the Mozarteum in Salzburg and the Théâtre des Champs Élysées in Paris.

In the season 2018-2019 Aylen Pritchin reunites with Teodor Currentzis and the MusicAeterna orchestra and comes back as a guest soloist to the Svetlanov Symphony Orchestra. As a soloist he is also engaged to make his debut with Transilvania Philharmonic Orchestra and Cannes Symphony Orchestra. In April 2019 Aylen Pritchin made his recital debut in Canada together with his duo partner Lukas Geniusas.

In December 2017 the Russian label Melodiya has published Aylen Pritchin’s third album with Prokofiev´s works for violin and piano recorded together with Yury Favorin. Other CDs include Russian music for violin (Tchaikovsky, Stravinsky, Desyatnikov, 2016) and piano trios by Shostakovich, Weinberg and Ravel with Lukas Geniusas and Alexander Buzlov.
Information for July 2019