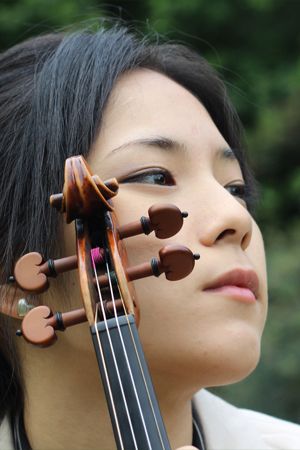 Ayako Tanabe is a talented violinist of virtuoso technique and impeccable taste. She demonstrates her lofty sense of intonation and subtle feeling for style when performing music from highly diverse eras, ranging from the Baroque to the present day.
Ayako Tanabe was born in Japan in 1987. In 2007 she graduated from the Central School of Music of the Moscow State Tchaikovsky Conservatoire, graduating from the Moscow Conservatoire itself in 2012 (class of Sergei Kravchenko).
From an early age she has toured internationally on a regular basis. On numerous occasions she has appeared with symphony orchestras in Japan, Russia and Turkey among other nations. Prize-winner at several international competitions including the International Balys Dvarionas Competition in Vilnius (1st prize, 2004), The Winner of Belgrade competition (1st prize, 2005), the International Ludwig van Beethoven Competition in Sankt Pölten (1st prize, 2010) and the International Aram Khachaturian Competition in Yerevan (1st prize, 2012).
Regularly appears at such international festivals as the Spring Music Festival in Cyprus, the Bemus festival in Belgrade, the Bach Festival in Leipzig, the Magister Ludi festival of contemporary music in Moscow and the festival Beyond Music in Spain. Since 2009 she has been a leader and soloist of the Russian Conservatoire chamber cappella.