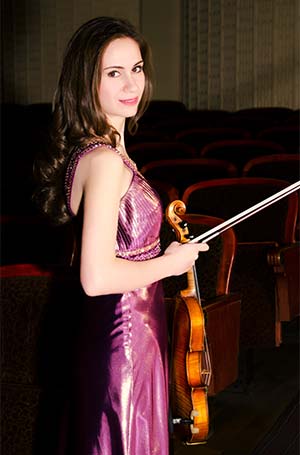 Violinist Anush Nikoghosyan was born in Yerevan. Aged five she got her first violin lessons with Petros Haykazian and further studied at the Yerevan Komitas State Conservatory. For several years she studied with Eduard Topchjan, Principal Conductor of the Armenian National Philharmonic Orchestra. She is currently a student at the Hochschule für Musik und Theater München (class of Christoph Poppen). Since 2013, Anush Nikoghosyan has been studying with Julia Fischer. She earned her master-degree in 2015 and continues her study for concert examination.

From 2001 to 2005, she was the scholarship holder of Vladimir Spivakov International Fund. Anush participated in various international festivals in Czech Republic, the Netherlands (Middelburg), Lithuania (Kaunas) and Russia (Moscow).

Anush has been a prize-winner at numerous international violin competitions, most importantly in 2010, when she was awarded the 1st prize of the International Kaerntner Sparkasse Woerthersee competition (Austria), which led to many invitations from some of the most prominent concert halls and renowned orchestras. In July 2011, Anush was invited to play at the renowned Pacific Music Festival Sapporo (Japan) as a soloist under famous Maestro Fabio Luisi. In 2014 she was invited to the Rimini Meeting festival, the Festival della Nazioni in Citta di Castello, and the Ravello Music Festival (Italy). In October 2014, she appeared at the Bruckner Festival Linz (Austria) and the Yerevan International Music Festival.

Since 2013, Anush Nikoghosyan has been playing a Jean-Baptiste Guadagnini violin (Milan, 1753).